Lindsay Carter Warren, lawyer, legislator, congressman, and comptroller general of the United States, was born in Washington, Beaufort County, the son of Charles Frederic and Elizabeth Mutter Blount Warren. He attended the Bingham School in Asheville and The University of North Carolina (1906–8), where he also studied law in 1911–12. Admitted to the bar in 1912, he served as Beaufort County attorney and chairman of the county Democratic executive 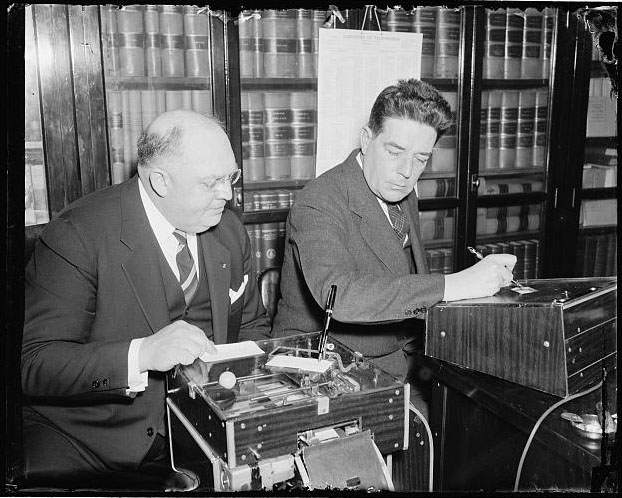 committee from 1912 to 1925. In 1917 and 1919 he was a member of the state senate. Associated with O. Max Gardner politically, he succeeded Gardner as president pro tempore of the senate when Gardner became lieutenant governor. Gardner, Warren, and J. Melville Broughton were the mainstays of a group of Young Turks in the Democratic party that opposed the Simmons-Bailey faction.

In the 1920 special session of the legislature on woman suffrage, Warren opposed its champion, Gardner; outmaneuvering the proponents, he defeated the proposed amendment in the senate. He served in the house in 1923–25, including the special session in 1924 on state ports.

Warren was elected as a Democrat from the First District to the Sixty-ninth Congress in 1924 and to the seven succeeding Congresses. He remained extremely active in both state and Democratic party affairs. At home he was chairman of the Democratic conventions of 1930 and 1934 and temporary chairman and keynote speaker of the 1938 convention. In 1929 and 1931 he was seriously mentioned as a candidate for governor but refused to run. In 1931 he served on the North Carolina Constitutional Commission and joined Josiah Bailey and Robert R. Reynolds to lead the fight for the repeal of Prohibition.

Warren's career in Congress was greatly influenced by his close friend and political mentor, Speaker and later Vice-President John Nance Garner. Warren was chairman of the House Accounts Committee and served on the following committees: Roads, Special Conservation of Wildlife Resources, Merchant Marine and Fisheries, Select Government Reorganization, and Expenditures in the Executive Departments. His areas of legislative expertise included agriculture, rivers and harbors, the Coast Guard, conservation, and government reorganization. He sponsored and acted as floor leader for the passage of the Merchant Marine Act, Cape Hatteras National Seashore Act, Wright Brothers National Memorial, Executive Reorganization Act of 1939, and Congressional Reapportionment Act of 1940.

On Capitol Hill he was recognized as a skilled parliamentarian and a master of House rules. Although he had a reputation as an effective and influential New Dealer, he did not support President Franklin D. Roosevelt's proposal to pack the Supreme Court. He was twice elected Speaker pro tempore of the House and for a short period after Speaker William B. Bankhead's death, he acted as majority leader. Warren left the House on 1 Nov. 1940 to become comptroller general of the United States; it was as head of the General Accounting Office that he made his most indelible contribution to the nation.

The GAO was in disorder when Warren took over. Since its creation by the Budget and Accounting Act of 1921, the GAO had lacked progressive and innovative leadership. In August 1941, to try to bring some order to the GAO, he created a special planning and budget section. As war spending escalated, he separated cost-plus and other war contracts from the regular audits. On 18 Aug. 1942 he established a division to audit war contracts with field offices throughout the country. Warren argued often and long, but unsuccessfully, for a GAO audit of terminated war contracts, but the Contract Settlement Act of 1944 excluded a meaningful GAO audit from the settlement process.

Another initial concern was the GAO's limited, or total absence of, review of government corporations. From early 1943 to December 1945, when the Government Corporation Control Act was passed, he required GAO audits of the financial transactions of these corporations. To carry out the new commercial-type audits, he created a Corporation Audits Division staffed by professional public accountants. He also was instrumental in including in the 1946 Legislative Reorganization Act provisions that the GAO was authorized to determine whether public funds were administered economically and efficiently, and the Committee on Expenditures in the Executive Department was established to receive GAO reports. In 1952 this became the Committee on Government Operations.

By 1947 Warren's initiatives were taking new directions, as he, Secretary of the Treasury John W. Snyder, and Director of the Budget James E. Webb joined forces to improve accounting, budgeting, and financial reporting procedures. The agenda of these men, their staffs, and the Senate Committee on Expenditures became public knowledge, but the real work in this area was the result of the problem-solving approach of the North Carolina triumvirate: Warren, Webb, and Undersecretary of the Treasurer O. Max Gardner. These three Tar Heels laid the foundations for the Joint Accounting Improvement Program, and Warren formed an Accounting System Division in the GAO to supervise it. The program's significance lay in recognizing the executive branch's concern with management in accounting systems. The GAO redirected its approach from prescribing accounting systems to consulting with agencies in developing accounting methods.

During the same period Warren adopted a comprehensive audit program employing commercial-type audits. These were built on the GAO's experiences in auditing government corporations and its new responsibilities under the Federal Property and Administration Services Act of 1949 for prescribing property accounting systems and auditing them. The Joint Accounting Improvement Program and the Comprehensive Audit Program required the GAO to recruit experts to develop modern financial management practices. These basic changes were enacted into law by the Budget and Accounting Procedures Act of 1950, which placed the major responsibility for financial management practices on the departments and agencies. It allowed the GAO to use the comprehensive audit approach to look beyond simple legality and the propriety of expenditures.

Warren's tenure was characterized by basic redirections in the GAO's role: from antagonism towards executive departments and agencies to cooperation, from limited support of Congress to extensive and detailed programs of aid (audit reports and reviews to Congress increased fivefold), from cursory audits of millions of vouchers to a comprehensive audit, from a policy of concentrating auditing in Washington to audits at regional offices, and finally, a European office, and from GAO mandates on accounting systems to a cooperative program with the Bureau of the Budget and the Treasury Department—the Budget and Accounting Procedures Act of 1950. During the same period Warren withstood an attack by the first Hoover Commission, which had recommended severely limiting the GAO's independence of the executive.

During Warren's last years as comptroller general he reorganized the GAO so that it could better carry out the new directions in accounting procedures he instituted. He proudly pointed to the 1941–54 collections of the GAO, $915 million—more than twice the cost of running the GAO. He also reduced the GAO staff from a peak of 14,906 in 1946 to 5,890 in 1954 while, at the same time, upgrading the personnel.

For reasons of health Warren retired on 30 Apr. 1954 and returned to North Carolina, where he spent much time on the Outer Banks. On 24 Apr. 1958 he participated in the dedication of the Cape Hatteras National Seashore, celebrating his bill of 1937 that created the first national seashore park.

In 1959 he returned to the scene of his earliest legislative battles, the state senate. He successfully led fights against legislative reapportionment and court reform, and for toll-free bridges across Alligator River and Oregon Inlet.

Warren ended his public service in that same chamber. The News and Observer explained that although he chaired no committee, represented only a rural area, and was not any more brilliant than several of his peers, he was "the most powerful man in the 1961 Legislature." He dominated its last session—the last to meet in the old state capitol—by controlling a sizable bloc of votes on three key issues: state senatorial redistricting, court reform, and congressional redistricting. His plan for the redistricting of the state senate was accepted despite the objections from representatives of the more populous areas. Further, he amended the proposed Bell-Taylor amendment to the constitution by maintaining the control of the courts with the legislature. Warren believed that the legislature—not the executive or the judiciary—was the true instrument of the people's will. Last, he redrew the congressional boundaries so that eastern North Carolina, though losing population, did not lose a representative. His arguments to sacrifice a Republican and not a Democrat, and his balancing of the political powers in the state, led to the Jonas-Kitchen Bill.

On 27 Jan. 1916 Lindsay married Emily Diana Harris. They had two sons, Lindsay C., Jr., and Charles Frederic, and a daughter, Emily Carter Warren (Jones). He was an Elk and a member of St. Peter's Episcopal Church in Washington, N.C. He was buried in Oakdale Cemetery, Washington.