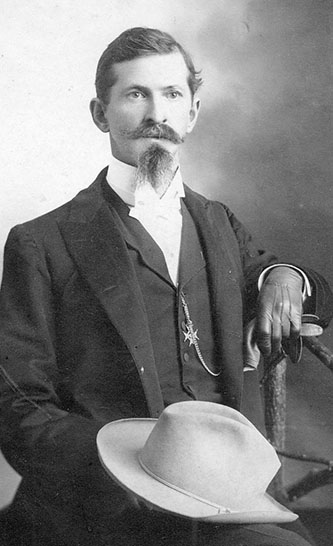 Stephen Beauregard Weeks, historian, bibliographer, collector of North Caroliniana, and government official, was born near Nixonton, Pasquotank County, to James Elliott and Mary Louisa Mullen Weeks. On the death of his parents, the child was reared by his father's sister and her husband, Robertson Jackson.

After attending the Horner School at Henderson, Weeks entered The University of North Carolina, where he was graduated with second highest honors in 1886. He remained there, earning a master's degree the next year and in 1888 receiving the first doctor of philosophy degree ever given by the Department of English. That fall he entered Johns Hopkins University, where he came under the influence of Herbert Baxter Adams, America's foremost exponent of the German or "scientific" school of historical investigation. In 1891, after receiving his second doctoral degree, Weeks joined the faculty of Trinity College in Randolph County. Within the year he organized the Department of History and Political Science, founded the Trinity College Historical Society, and established himself as the first "professional" historian in North Carolina. He moved with the college to Durham, but in 1893 he resigned and returned to Johns Hopkins on a one-year fellowship.

The following year Weeks joined the Bureau of Education of the Department of the Interior in Washington, D.C., as a specialist in educational history and associate editor of the bureau's annual report. For five years this position provided him with time for historical research and his consuming passion, the collection of books and articles relating to North Carolina. In 1895 he delivered the centennial address at The University of North Carolina, and in 1896 he was temporary chairman of the organizational meeting of the Southern History Association.

Just before the turn of the century, Weeks developed a severe lung ailment, and his request for assignment as principal teacher in the Indian School at Santa Fe, New Mexico Territory, was granted. Four years later he was promoted to the superintendency of the San Carlos Agency School in Arizona Territory, where he remained until 1907, by which time his health had been restored. Impressed by Weeks's sketches written for inclusion in Samuel A. Ashe's Biographical History of North Carolina, the publisher Charles L. Van Noppen persuaded Weeks to join his firm as an editor, assisting with the seventh volume of the biographical series and revising the first volume of Ashe's History of North Carolina. Then, in 1909, Weeks returned to the site of the old Trinity College in Randolph County as principal teacher in a public school. He rejoined the Bureau of Education in Washington as historian in 1911 and remained there until his death.

Though Weeks's monographs and articles were generally sound, not all of his early writings—for instance, his article on the Robeson County Indians—have stood the test of time. However, he himself recognized that "Historical truth is a progressive evolution, the product of successive generations of painstaking scholars. . . . It is only by continued research, by repeated investigation and reweighing of old beliefs in the light of fuller evidence that we can hope to arrive at ultimate truth." His single most useful publication was the monumental four-volume index to the combined Colonial Records of North Carolina, edited by William L. Saunders, and State Records of North Carolina, edited by Walter Clark, to which was added an exceedingly informative "Historical Review." Among his publications on non–North Carolina subjects were History of Public School Education in Alabama (1915) and History of Public School Education in Arizona (1918).

Weeks on 12 June 1888 married Mary Lee Martin, the daughter of the Reverend Joseph Bonaparte Martin, and they had two children, only one of whom—Robertson Jackson Weeks—lived to adulthood. On 28 June 1893, two years after her death, Weeks married Sallie Mangum Leach, a daughter of Martin W. Leach of Randolph County and a granddaughter of Senator Willie P. Mangum. By her he fathered four children, two of whom—Willie Person Mangum and Sallie Preston—lived to adulthood.

A man of medium build—about 5' 11" and 170 pounds—Weeks had wavy brown hair, blue eyes, and a somewhat ruddy complexion. He had a mustache and a Vandyke beard, and he often wore a high collar with a plain white bow tie. He was "an erect, rapid walker, a good though not scintillating public speaker, and a provocative conversationalist."

Although he recovered sufficiently from a mild stroke in 1917 to return to work, Weeks died the following year from a heart and kidney complication and was buried on the Willie Person Mangum farm cemetery in northern Durham County. The News and Observer editorialized: "His career ought to be given liberal mention in every history of the State. . . . It is likely that Dr. Weeks died a poor man. There is little reward of a financial kind in ransacking old libraries and musty correspondence files to establish the facts of history. But few men have wrought more capably and helpfully for the State than he did and the heritage of duty faithfully and efficiently rendered is more to be prized than great riches."

Who's Who in America (1916–17). Many of Weeks's papers are in the Southern Historical Collection, University of North Carolina, Chapel Hill. His library and an oil portrait by Paul E. Menzel are in the university's North Carolina Collection.