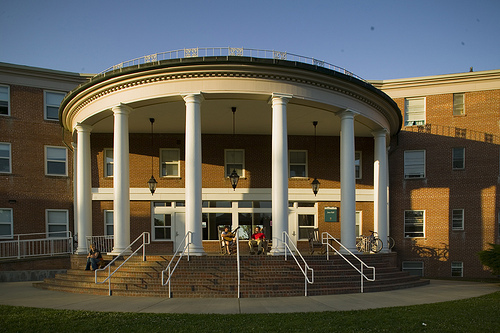 Brevard College, a United Methodist institution located in the mountain town of Brevard, was named for Ephraim Brevard, a teacher and one of the local leaders that produced the Mecklenburg Resolves in 1775. Brevard College traces its origins to three institutions: Weaver College, a two- and four-year school founded in Buncombe County in 1853 by the "Brothers of Temperance"; Rutherford College, founded as the Owl Hollow School in 1853 in Burke County; and Brevard Institute, a high school inaugurated in 1895 by Asheville businessman Fitch Taylor and his wife Sarah. During the depression-ridden 1930s, all three institutions closed their doors, leading to the creation of Brevard College in 1934.

The college, which enrolled 394 students taught by 24 faculty when it opened, was designed to provide opportunities for Mountain residents who otherwise would not have been able to secure secondary and postsecondary training. This was reflected in the school motto, "Labor, Learn, Live." The first president of the new college was Eugene J. Coltrane. During Coltrane's 16-year tenure, Brevard College had its own farm, garden, and dairy; students were responsible for much of the day-to-day operation of these facilities. The curriculum, in keeping with the college's regional outlook, included classes in agriculture, home economics, and industrial arts; there were also traditional academic courses in the arts and sciences.

The administration of President Emmett K. McLarty (1957-68) marked several noteworthy events, including the adoption of a new college seal and motto, Cognosce Ut Prosis ("Learn in order that you might serve"), creation of the Concerned Student Activist Movement, and the admission of the college's first African American students.

Brevard College in the early 2000s enrolled approximately 650 students, and although it still offered associate degrees, it was primarily a four-year institution offering a variety of majors. (The vast majority of the students completing an associate degree go on to four-year colleges.) A number of unique programs, including the School of Wilderness Education's Certificate in Outdoor Leadership Areas, keep the college vibrant. The institution holds membership in the National Association of Music Schools and has an Intensive English Institute for international students.