Building and loan associations were welcomed by local communities because they significantly increased the number of home-owning citizens. The editor of the local newspaper in Concord opined on 1 June 1888 that "nothing that has been started in our town for years will accomplish half as much towards giving homes to the people and improving the town as this B. & L. Association. A poor man can buy his home and pay for it with very little advance on his present monthly payments for rent."

By 1911, only 30 years after the founding of the first building and loan association in North Carolina, there were 113 such organizations, with 25,174 members and assets of nearly $8.5 million. Building and loan associations survived both the Great Depression and the Second World War. During the late 1940s and 1950s they provided capital so that the young couples who produced the "baby boom" could purchase their own homes. The years that followed saw a dramatic change in the industry, however, as the associations moved from their traditional roles into offering diverse banking services. Many converted to stock-owned institutions. Deregulation produced a fiercely competitive climate and forced changes in the marketing of services. North Carolina's well-managed building and loan institutions survived the widespread national savings and loan failures in 1988, which were followed by adverse publicity and intensive regulation. 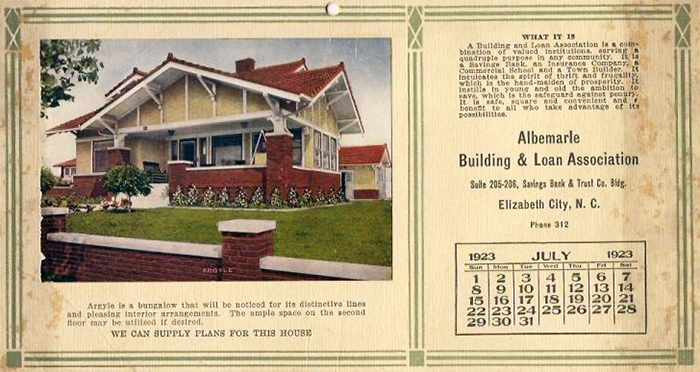 Henry Morton Bodfish, ed., History of Building and Loan in the United States (1931).

Snowden, Kenneth A. and James, Joshua. "The Federalization of Building & Loans, 1927-1940: The North Carolina Experience." Department of Economics, UNC at Greensboro. 2001. http://www.uncg.edu/bae/people/snowden/NCB_LASSA.pdf

the provident saving and

Good Afternoon-
This is a fascinating read. I am learning more about the Building and Loan part of banking. I am curious to know if North Carolina experienced some of the embezzlement that occurred in Colorado Springs Colorado in the late 1920's and 1930's. There is a new book out in 2017- "Shortfall by Alice Echols which detalis her grandfather's embezzlement of a B & L.
Sincerely,
Steve Erhart

Thank you for visiting NCpedia and for sharing this book and question.

That’s a great question!  NCpedia does not have anything specifically about this and I am not able to find anything readily that delves into whether or not there was significant embezzlement in North Carolina during that time period.  If you are still trying to answer this question, please contact our reference librarians at the NC Government & Heritage Library.  You may contact reference services by phone, email or our online chat during business hours.  Here is a link to the contact page: https://statelibrary.ncdcr.gov/ghl/contact.

I have also replied to you at the email address you included with your post.