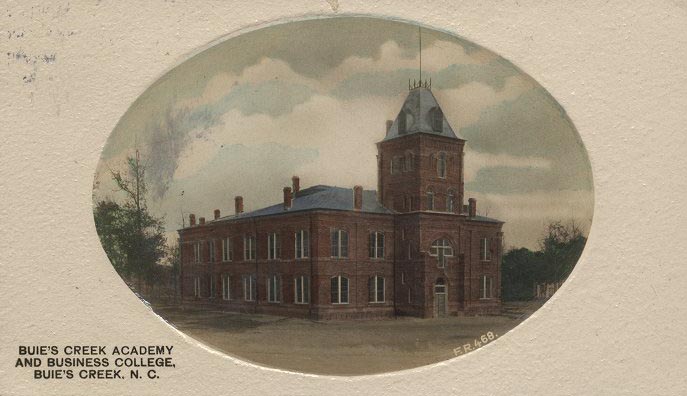 Campbell University, a Baptist institution of higher learning located in Buies Creek, started as Buies Creek Academy in 1887 with an enrollment of 21 students. The school was founded by James Archibald Campbell, a Baptist minister and graduate of Wake Forest College, to fulfill his desire to offer Christian education to the youth of the area without regard to financial status. By 1898 the academy had three buildings, including a large wooden tabernacle where commencements were held. On 20 Dec. 1900, a fire destroyed all the buildings except the tabernacle. Zachary Taylor Kivett came to visit after the fire and found Campbell "in bed and discouraged to the limit." Kivett said, "Why are you in bed? I thought Campbells had Humps on them." This comment is thought to be the source of the institution's unusual mascot, the Fighting Camel. Kivett pledged to build a new brick building; Kivett Hall, completed in 1903 and extensively renovated since, remains the oldest building at Campbell University. 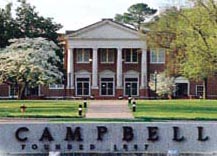 In 1926 Buies Creek Academy was elevated to junior college status and its name changed to Campbell College in honor of its founder. In 1961 the college became a senior institution, and it achieved university status in 1979. The Campbell University School of Law was established in 1976, and the Lundy-Fetterman School of Business in 1983. The Schools of Pharmacy and Education were launched in 1985. By the early 2000s the school had an enrollment of more than 9,700 students, including those in both the main campus and extension campuses. Extension programs included not only students in Sanford, Fayetteville, Raleigh, Goldsboro, Rocky Mount, and Jacksonville, but 1,028 students at Tunku Abdul Rahman College in Kuala Lumpur, Malaysia.