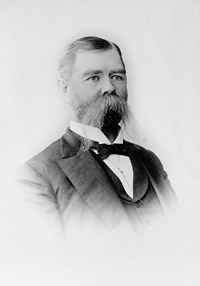 Elias Carr (1839-1900), leader of the statewide Farmers’ Alliance and the broader agrarian movement, exemplified the fading tradition of the planter-governor. The son of Jonas and Elizabeth Hilliard Carr, he was born on February 25, 1839, at Bracebridge Hall, the 2,000-acre family plantation in Edgecombe County. Orphaned by the age of four, young Carr grew up in the home of his uncle and aunt in Warren County. There he attended a local school before leaving for the Bingham School in Orange County. He completed his education at the University of North Carolina (1855-1857) and the University of Virginia. In 1859 he married Eleanor Kearny; they would have six children.

Carr bought his brother’s interest in Bracebridge Hall and prepared for the life of a planter, but the Civil War interrupted his plans. He enlisted in the Forty-first Regiment (Third Cavalry) in 1861. Nine months later he received a planter’s exemption and returned home. Carr applied progressive farming techniques and sound business practices.

Consequently, he suffered fewer losses than most of his contemporaries during the war. He was community-oriented and civic-minded, as shown by service on the Edgecombe County board of commissioners, Sparta Township school commission, and as first president of the North Carolina Society of the Sons of the Revolution. Yet, he lacked political ambition and, prior to 1892, never sought a high elective office. He was most comfortable in his agricultural work.

Carr served as the first president of the Farmer’s Institute of Edgecombe County. In 1887 Governor Alfred M. Scales commissioned him to attend the National Farmers’ Conference and the following year he was elected the first president of the North Carolina Farmers Association. He served on the first board of trustees of the North Carolina College of Agriculture and Mechanic Arts (present-day North Carolina State University). Nonetheless, the Farmers Alliance was the vehicle that cast the spotlight on Carr. Organized in North Carolina in 1887, the Alliance soon absorbed the Farmers’ Association. Two years later Carr was elected president of the state Farmers’ Alliance and was re-elected in 1890. He led the group’s effort to secure legislation increasing the school tax to improve rural schools. Ever increasing political activity by farmers forced Carr into the arena that he had long avoided.

A growing disenchantment within the Democratic Party between supporters of agricultural interests and those favoring business and industry threatened to split the party in 1892. Carr, a steadfast Democrat but with strong ties to the farmers’ movement seemed the most likely gubernatorial candidate to hold the sparring factions together to prevent a Republican upset. Though a splinter group did run a third party candidate, the Farmers’ Alliance threw its support to Carr and, along with the conservative Democratic vote, provided a comfortable margin of victory.

Considering his lack of political experience and the polarized factions surrounding his administration, Carr had a successful governorship. He recommended legislation to improve the notoriously bad road system; enthusiastically supported the geological survey; and campaigned for better rural schools. In calling for the latter, Carr urged the passage of a compulsory attendance law and advocated a tax increase during a period of depression to fund school improvements. The governor preferred to see things firsthand so he made occasional, unannounced visits to the state’s educational, charitable, and penal institutions before making recommendations. Carr’s ninety-nine year lease of the North Carolina Railroad to the Southern Railway in 1895 engendered massive criticism, much from his own party. That and the Fusionist-controlled legislature (a loose coalition of Republicans and Populists) virtually handicapped him for the last two years of his term. Carr retired to the peaceful farm life at Bracebridge Hall after his service as governor. He died on July 22, 1900, and was buried in the family cemetery on the grounds.