She was well educated by private tutors and at a girls' school in Petersburg, Virginia. She mar­ried wealthy planter Elias Carr on May 24, 1859. The wedding was a social event in Warren County, and a lavish reception followed. Carr, a well-to-do country gentleman, gave his wife an elaborate wedding ring - an opal surrounded by diamonds. 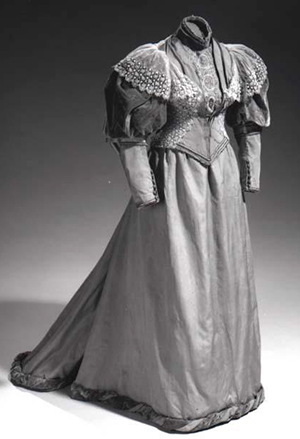 The Carrs lived at his residence, Bracebridge Hall, in Edgecombe County. Because Eleanor's father was convinced that the air there was more conducive to the spread of malaria, she promised him that she would not spend summers at her new home but would return to the healthier Warren County. During the early years of her marriage, she and the children spent the summers at Huntersville, her family home in Warren County. In 1867 Carr purchased a Warrenton estate for his wife so that she might spend her summers in the more favorable cli­mate. While he remained at Bracebridge Hall to manage the plantation during the summer months, he wrote numerous letters to Eleanor in Warrenton. The letters indicate how badly he missed her and the children and how much he looked forward to being together again. In addition to expressing such tender feelings, Carr's letters often discussed politics with his wife. He related news of the plantation and kept her abreast of events in the area.

Eleanor Carr, a retiring woman by nature, was somewhat uncomfortable in her role as hostess at the Executive Mansion . Her daughter-in-law, Martina Van Riswick Carr, wife of her son William, assisted her and proved to be an asset, inasmuch as she enjoyed society. In February 1893 the legislature allocated funds to purchase furniture for and to complete and repair the mansion. Much work was done on the house and grounds dur­ing Elias Carr's administration. It was during those years that David Haywood, whom members of numerous first families called "Uncle Dave," came to the mansion as butler. Haywood 's devotion to the first family was unerring, and he served fourteen governors' families during his long career.

Both the Carrs were interested in genealogy and were charter members of two North Carolina ancestral societies- Elias of the Sons and Eleanor of the Daughters of the Revolution. He was the first president of his society; she was the first librarian of hers. She was reared as a Methodist but joined the Episcopalian faith after her marriage. Throughout her life, however, she continued to attend services in churches of both denominations. She made certain that her children received religious instruction in their home. Her concern extended to their intellectual well­ being as well. All received private educa­tions both at home and in various schools. In spite of her wealthy upbringing, Eleanor Carr ran the household at Bracebridge Hall very efficiently, doing much of the cooking and sewing herself.

Eleanor Kearny Carr died on March 29, 1912, in Washington, D.C., where she had gone to undergo surgery and was staying with her son. Her body was returned to North Carolina and buried at Bracebridge Hall.