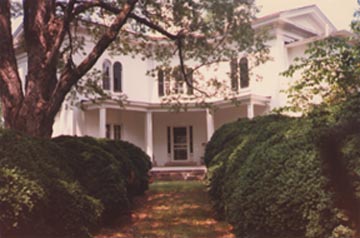 The Cooleemee Plantation is located in Davie County on the Yadkin River. William Giles, a speculator, purchased the property and sold it to Zachariah Haden, who subsequently deeded it to Richmond Pearson, an in-law. In 1804 Pearson's son, Gen. Jesse Pearson, was given the land as a wedding present. He gave it the name Cooleemee, apparently the name of an Indian village in Alabama, where Pearson served in the Creek War. The name is believed to mean, "place where the white oaks grow."

In 1817 Maj. Peter Hairston bought the 2,300-acre plantation from Pearson. The major's grandson, Peter Wilson Hairston, inherited the plantation in 1832. By 1860 he had increased Cooleemee to 4,200 acres, with 300 slaves raising tobacco, corn, cotton, and hogs. Hairston sold only one of his slaves, and only one ever fled the plantation. Notable among Cooleemee's slaves was coachman John Goolsby, self-described descendant of an African king. When Peter W. Hairston left to serve the Confederacy, Goolsby accompanied him.

The plantation home was built from 1853 to 1855 and is in the shape of a Greek cross. More than 300,000 bricks made on the plantation were used in its construction. Inside is a winding stairway, largely self-supporting. In 1850, Godey's Ladies Book carried the house plan and a picture of the proposed building. In 1854 J. E. B. Stuart visited Cooleemee to call on his sister Columbia, wife of Peter W. Hairston and mistress of the plantation. Columbia died in 1857 while giving birth to a daughter. Peter Hairston married again in 1859, to Fanny Caldwell of Salisbury. When the Civil War broke out, Hairston volunteered as an aide for Stuart, who had risen to the rank of general. Later he served as an aide for Gen. Jubal Early in the Shenandoah Valley near the war's end.

After the war, the Hairstons moved to Baltimore, Md. In 1886 Peter died and the family returned to Cooleemee. The plantation remained in the Hairston family throughout the twentieth century. Descendants of the slaves at Cooleemee founded the Hairston Clan, holding their first reunion in 1974. In August 1979, when the U.S. Department of the Interior designated Cooleemee as a National Historic Landmark, Squire Hairston of the Hairston Clan delivered the principle address. A few other notables in the group included Jester Hairston, actor, composer, and musician; Guy E. Hairston Jr., U.S. Air Force general; William Hairston, playwright; Nelson G. Hairston, animal ecologist and Kenan Professor at the University of North Carolina at Chapel Hill; and Happy Hairston, former member of the Harlem Globetrotters basketball team.

Is the plantation open for

Is the plantation open for tours?

We are no longer doing tours.

We are no longer doing tours. It may be by request only and the individual or group must contact Spurgeon Foster at 336-817-2640

Thank you for your comment. Strangely enough, I cannot find that information. Perhaps others who know can let us know.

Hello, I have been

Hello, I have been researching my family and my 5th time great grandfather is supposedly buried in the Cooleemee Plantation Cemetery. Is this on the property? Is there anyway to find out if he was working there or living there? He died around 1833. His name was something like Johann Nicholas Cope or Kopp.
Thanks for you help.
Janet

Hi Janet- I am just now

Hi Janet- I am just now seeing your question. In case you have not found out, yes Nicholas is buried there, as well as many other family members. I am his descendant as well, so hello cousin! Feel free to reach out to me if you would like more info.

Greetings, I purchased a very

Greetings, I purchased a very old coffee tin today. The brand is Cooleemee Private Plantation Coffee. There is an image of a plantation with field workers on the side of the can. The tin is a bucket-type coffee tin with the original lid. I cannot find any information about this coffee tin anywhere on the internet. Is anyone familiar with this item, including age, year of manufacture, etc... Thank you.

"The Hairstons: An American Family inn Black and White", New York, 1999 by Henry Wiencek is a fascinating record of this family. Winner of the National Book Critics Circle Award. Wiencek gave us a close-up of racial relations within this family both then and now. The Hairston Dynasty ran for 3-4-5 generations from Virginia, through NC, SC, Alabama and Mississippi. The book prompted great scholarship, producing exponential publications.

My paternal grandmother was

My paternal grandmother was Emmaline Hairston. I’ve been trying for years to find our family history. She is a descendant of this family is all we know. How do we find out more. Cardinal

I have forwarded this request to our reference department. They will get back to you within the next day or so with more information for you.