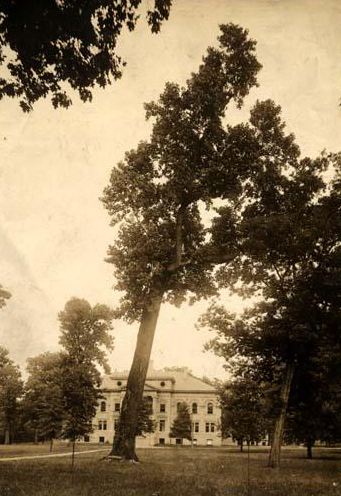 The Davie Poplar is a landmark tree located in McCorkle Place on the campus of the University of North Carolina at Chapel Hill. Originally known as the "Old Poplar," the tree predates the university and has been a source of many legends and tales about the founding of the nation's first state university in Chapel Hill. The area adjacent to the tree has traditionally been considered the site where a committee of men appointed by the Board of Trustees came to a decision on where to locate the university's buildings. In the late 1800s, Cornelia Phillips Spencer gave the tree its widely recognized name in honor of the father of the university, William Richardson Davie. The area beneath the Davie Poplar has been used as a rallying point for university events as well as the site of many graduation ceremonies-including the 1859 commencement, which was attended by President James Buchanan and his secretary of interior and UNC alumnus Jacob Thompson. The tree is incorrectly referred to as a poplar tree, as it is actually a specie of Liriodendron tulipifera, a relative of the magnolia. However, southerners typically call such a tree a "yellow poplar" because of its flowers.

The Davie Poplar has been damaged by many storms, which have taken away much of the tree's symmetry. The UNC class of 1918, fearing the demise of the tree, planted a grafted cutting of the Davie Poplar that soon became known as the Davie Poplar Jr. In 1953 a steel band was installed around the upper part of the original tree to attach support cables to nearby younger, stronger trees. The southward-leaning tree has also been strengthened by concrete reinforcements to its hollowed interior, and, during the 1960s, pruned to relieve some of the stress on its trunk.

The Davie Poplar received special recognition during the university's bicentennial celebration in 1993, when 104 sixth-grade students from each of North Carolina's 100 counties (representing the high school class of 2000) were invited to a ceremony held at the tree's base. Each student was given a 20-inch seedling taken from the tree to be planted in their home county as a symbol of the continual link between the university and the public school system of North Carolina.