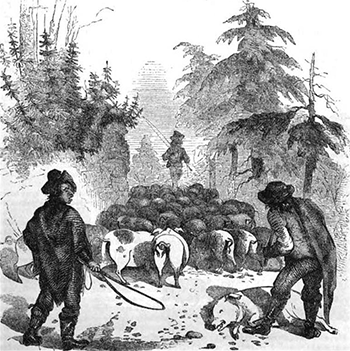 Drovers were individuals who oversaw the movement of livestock herds from one place to another. From the early 1800s until railroads reached the mountains in the 1880s, livestock droves were a major industry in North Carolina. The chief thoroughfare for moving livestock from eastern Tennessee and western North Carolina to markets in South Carolina followed the French Broad River eastward to Asheville and then south. Overseen by drovers, livestock such as hogs, cattle, mules, horses, and poultry (primarily turkeys) traveled "on the hoof" for 8 to 10 miles per day on what was often a 200-mile journey. Droves were usually made from October to December. A series of toll roads, such as the Buncombe Turnpike from Greenville, Tenn., to Asheville and the Little River Turnpike, which ran southward from Mills River, were built and maintained locally by revenues from toll gates at 10- or 15-mile intervals. "Stands," taverns or inns along the way, provided food and shelter. Stand proprietors were also merchants, selling goods to local farmers in return for corn at harvest time and taking payment from drovers in the form of lame animals or cash after the herds were sold.