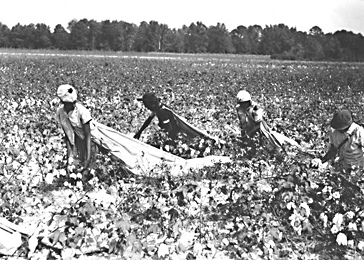 North Carolina has produced and transported commercial exports since its establishment as an English colony. The primary exports from the colony were products of the forest. By the 1720s naval stores, including turpentine, rosin, tar, and pitch (used for painting, caulking, and preservation of wood and rope), became valuable exports highly sought after by the Royal Navy and the British merchant fleet. Hundreds of thousands of barrels of naval stores worth £50,000 annually and produced from the longleaf pine forests along the Cape Fear River Valley were shipped from Wilmington. Lumber products, primarily cypress shingles and barrel staves, hoops, and headings, were exported by the millions to British colonies in the West Indies and New England as well as to England. Oak bark was also a significant export to England from the colony for use in tanning leather.

Foodstuffs constituted another important category of exports from colonial North Carolina. By the early 1770s, almost 180,000 bushels of corn were being shipped annually to New England via the Albemarle Sound. Much of the wheat crop grown in the colony was destined for export, and beans and peas were shipped to the British West Indies and New England in substantial quantities. Herds of cattle or hogs were driven to markets as far away as Charleston, S.C., Philadelphia, and Lancaster, Pa. Salted meat and fish were also shipped to England and the West Indies. Tobacco was grown mainly in the Albemarle Sound region bordering Virginia. Cured tobacco was packed in 1,000-pound hogsheads and transported to Glasgow by Scottish merchants or to New England in ships owned by Massachusetts or Rhode Island interests. 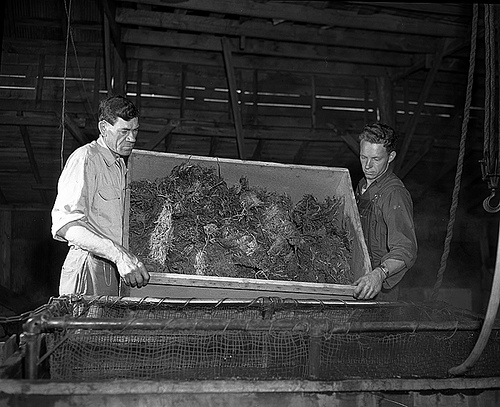 North Carolina's export trade was severely curtailed by the onset of the Revolutionary War. The colony lost access to its two major markets, England and the British West Indies, as a result of British naval and privateer activity as well as restrictions by the American Continental Congress on trade with the British. Following the war, foreign trade began to revive in the mid-1780s. Naval stores regained their prominence as the most valuable export, but their primary destination became New England. Foodstuffs and lumber products continued to be important export items to the West Indies and northern states. Tobacco exports increased significantly, from 360,000 pounds in 1768 to 6 million pounds in 1788.

In the first decades of the nineteenth century, North Carolina's primitive transportation network and its lack of rich natural resources, a good deepwater seaport, or large-scale manufacturing all hindered the state's economic development. In 1816 only $1.3 million worth of goods were exported from all of the state's ports, mostly carried in New England ships. The northern counties of North Carolina traded primarily with Virginia, while the southern Piedmont and western counties traded with South Carolina and Tennessee.

In the late 1830s, the economic outlook of the state began to improve. The Wilmington & Weldon Railroad steered a greater portion of export goods to Wilmington, at the expense of Norfolk, Va. The North Carolina Railroad, constructed in the 1850s and running from Charlotte to Raleigh and Goldsboro, linked western North Carolina and the Piedmont with the eastern ports and played a critical role in the development of manufacturing and agriculture in the state.

The outbreak of the Civil War dealt another devastating blow to the North Carolina export trade. Wilmington soon became the Confederacy's sole significant outlet to the world in the face of the Union naval blockade. Only about 270 ships, most owned by English and Scottish merchants, successfully ran the blockade in the years before Wilmington was captured in January 1865. The most lucrative outbound cargoes were cotton, tobacco, and turpentine, carried by the blockade-runners to Bermuda and Nassau, then shipped to England and other European destinations. 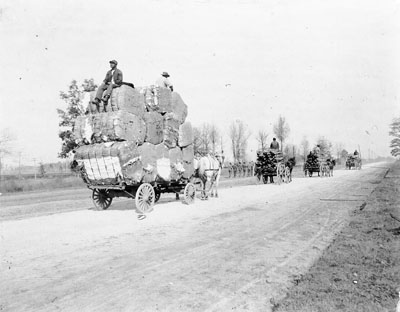 Beginning in the 1870s, the economy of North Carolina was transformed under the influence of northern capital and the Industrial Revolution. By 1880 textile output in the state had doubled over prewar levels. Many mills spun coarse yarn that was exported to markets in Philadelphia and New York, while others wove and exported various cloths, towels, clothing, and other products. Agricultural products continued to be major exports from North Carolina. After the U.S. Army Corps of Engineers deepened the Cape Fear River channel into Wilmington harbor, cotton exports increased significantly. By 1887, 170,000 bales were being shipped out of the port annually, with about two-thirds going to Liverpool, England, and much of the remainder heading to New York. Peanuts became a significant commercial crop and export after 1900. North Carolina wood products in the form of lumber and shingles continued to be sought after in Boston, New York, Philadelphia, and Baltimore. Naval stores were still exported by Norwegian, German, and British ships to European ports, but demand began to decline toward the end of the nineteenth century with the introduction of iron ships and synthetic substitutes for turpentine.

War once again disrupted North Carolina trade in 1914. Exports out of Wilmington dropped by 50 percent that year due to the loss of the German cotton market, the diversion of merchant ships to wartime needs, and the threat posed by German submarines. However, the war stimulated great demand for textiles in American markets. By the early 1920s, North Carolina had become the nation's leading textile- and tobacco-producing state, and its furniture industry was expanding rapidly. During the decade other companies, including wood pulp and paper producers, fertilizer makers, and cottonseed oil producers, also began to supply exports.

North Carolina exporting was deeply affected by the Great Depression, as annual export tonnage out of Wilmington dropped from 25,000 tons in the late 1920s to about 14,000 tons in 1930 before recovering in the middle of the decade. Tobacco exports increased, but cotton exports fell dramatically due to low crop values caused by overproduction, competition from Texas, depredation by the boll weevil, and development of synthetic fabrics. By the beginning of World War II, Wilmington had been reduced to the role of a local port, serving regions of North Carolina, South Carolina, and Tennessee not covered by the ports of Norfolk and Charleston and handling only bulk cargoes, since it lacked facilities for packaged and containerized goods.

World War II brought boom times to North Carolina as the state's industries sold almost $1.4 billion of materials to federal agencies. The state exported substantial quantities of textile products and lumber, all of the tetraethyl lead, and over half of the mica used by the armed forces. Wilmington won a lucrative shipbuilding contract and launched 125 Liberty ships and 117 of the larger Victory cargo ships.

North Carolina's economy experienced considerable diversification in the latter half of the twentieth century, producing a wide range of exports. In agriculture, the state exported tobacco, sweet potatoes, peanuts, and soybeans. Cotton production shrank dramatically as farmers turned to more lucrative crops. The state ranked high in the production and export of turkeys, and U.S. Representative Harold D. Cooley, as chairman of the House Agriculture Committee in the 1960s, helped open European markets for the exporting of North Carolina chickens. North Carolina hogs also became major export products. Shrimp became the state's most valuable seafood catch, while menhaden, a source of oil and protein for animal feed, was the most valuable fish. North Carolina also emerged as a leading brick-producing state in the last decades of the twentieth century, exporting more than 1 billion bricks each year.

Search results for 'Exports' in the North Carolina Digital Collections.