The Civil War battle at Fort Fisher consisted of two separate expeditions against the formidable Confederate fortification near the mouth of the Cape Fear River on 24-27 Dec. 1864 and 12-15 Jan. 1865. Fort Fisher, nicknamed the "Gibraltar of the South," consisted of a huge L-shaped earthwork constructed under the direction of Col. William Lamb, the fort's commander. The fort was located just above New Inlet on the peninsula of Federal Point, with Cape Fear to the west and the Atlantic Ocean to the east. It protected Wilmington, the last major blockade-running port of the Confederacy by late 1864 and the lifeline of Gen. Robert E. Lee's Army of Northern Virginia. Gen. Braxton Bragg was given command of the Department of North Carolina, with Maj. Gen. William H. C. Whiting leading a force at Wilmington. 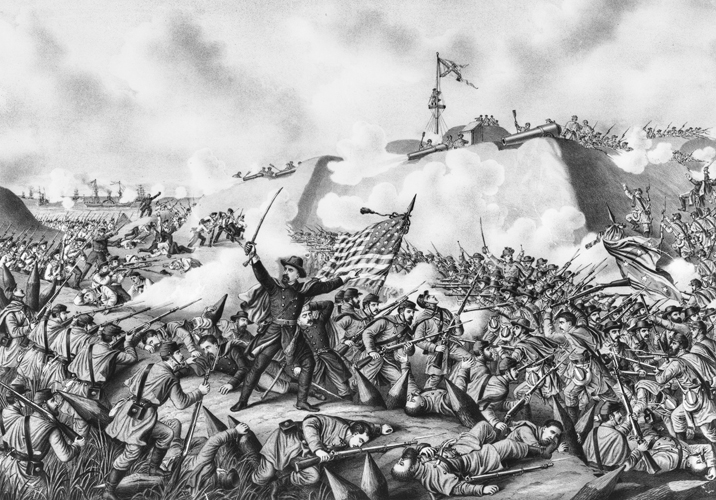 At the urging of Gideon Welles, secretary of the U.S. navy, plans for a Federal expedition commenced in the fall of 1864. Rear Adm. David Porter was given command of a naval assault force of 48 warships, while Maj. Gen. Benjamin F. Butler was to direct 6,500 men. As planning progressed, Butler devised the notion of floating a ship loaded with gunpowder near Fort Fisher and setting it alight. Although engineers were skeptical of the plan, Porter approved it. An old ship, the Louisiana, was loaded with approximately 200 tons of gunpowder and in the predawn hours of 24 December was exploded about 600 yards from shore. The sight and sound were impressive, but one Federal naval officer correctly remarked, "There's a fizzle." Colonel Lamb thought that a Federal ship had accidentally run aground and its magazine had exploded. At 11:30 a.m. Porter opened on the fort with 600 guns. The next day Union troops landed north of Fort Fisher and captured two batteries. However, when Butler drew near the fort and saw its strong defenses, he withdrew on 25-26 December. Butler's departure was so hasty that he left part of a regiment stranded until 27 December. Porter and Lt. Gen. Ulysses S. Grant (the Union army's general in chief) were furious at Butler, and Grant relieved him of command.

Brevet Maj. Gen. Alfred H. Terry replaced Butler as the new army commander with 8,000 more soldiers. Porter's squadron was also reinforced. On 12 Jan. 1865 this new force approached Fort Fisher. General Whiting arrived from Wilmington with an additional 600 men, increasing the garrison defending the fort to 1,950. Bragg had an additional 6,000 troops under Maj. Gen. Robert F. Hoke on the northern end of the peninsula. The Union bombardment started on 12 January and the Federals landed troops the next day. Amazingly, Bragg did not order Hoke up but kept his veteran troops huddled inside their earthworks. The Federal naval bombardment continued until 15 January and constituted the heaviest naval fire in history until that time. That afternoon, Brig. Gen. Adelbert Ames attacked the land face of the fort with 3,000 men, while 2,000 naval personnel assaulted the sea face. The naval column was repulsed, but the land face was captured after desperate hand-to-hand fighting. Whiting led a counterattack, heroically charging into the Union attackers, but he was severely wounded and his men dragged him to safety. They withdrew southward to Buchanan Battery and surrendered at 10:30 p.m. The port of Wilmington was now closed, but the town did not fall until 22 February.

General Bragg was highly criticized for his handling of the Fort Fisher defense, especially by General Whiting, who wrote two reports from a Federal prison charging Bragg with incompetence. The fall of Fort Fisher hastened the demise of the Confederacy by severing its last lifeline to the outside world.

This is really cool and

This is really cool and really Historical, you get a lot of good facts.!

This is really cool! :D

This is really cool! :D

Why did the battle of Fort

Why did the battle of Fort Fisher start in the first place?