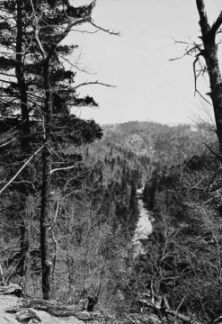 Gaps, often referred to as passes, are breaks or low spots along mountain ranges or ridges. If a gap is particularly precipitous and narrow, it can be designated a gorge. The term "gap" is old, having entered the English language from the Norsemen, gap being the Old Norse word for chasm. It is used mainly in the southeastern United States. Gaps have been important to human advancement on the continent for centuries, representing routes for transportation and communication into or away from areas that would otherwise be cut off from the rest of the world.

Most gaps in North Carolina are named for people (Gillespie Gap, McKinney's Gap) or physical characteristics (Deep Gap, Roaring Gap). Many gaps carry colorful names, such as Maggot Spring Gap, Frying Pan Gap, and Wildcat Gap. Some of the more important gaps in the state are Deep Gap, on the Blue Ridge in Watauga County, a key route for early settlers that is now utilized by U.S. 421; Hickory Nut Gap, on the Buncombe-Henderson County line, a primary route into the Asheville region; Rabun Gap, in Georgia, a route used by settlers coming into the extreme southwestern portion of the state; Soco Gap, an important pass used by the Cherokee Indians to cross the Balsam Mountains; and Swannanoa Gap, on the McDowell-Buncombe County line, a pass for travelers headed into the Asheville area that is now utilized by Interstate 40.

Who was Gillespie Gap named

Who was Gillespie Gap named for? I do not think it was the Gillespie Gun family.
However if the backwoods Va milita came thru there on the way to Kings Mtn. To take out Ferguson, one of the Gillespie's from Cowpasture, Thomas Gillespie (youngest brother to John Gillespie) was with the Va Militia . Thomas took the Boots back the boots of Reese Bowen (backwoods Va Milita leader who was killed at Kings Mtn) to his widow at Maiden Spring, Trazwell County. Thomas later went back and married Reese's daughter. FYI just a little history lesson!

Thanks for visiting and contributing!  And that's a good question about the naming of Gillespie Gap.

Unfortunately, I can find nothing definitive indicating when the gap received its name or whom it was named for.

In his 1881 book, King's Mountain and Its Heroes, Lyman Draper indicates that the gap was named for Henry Gillespie, "a hardy Irishman" whose land was used for camp by Campbell's men.  Apparently Gillespie was detained for questioning and let go. Unfortunately, Draper did not share his sources.  Here is the link to the mention of Gillespie:  https://archive.org/stream/cu31924032752846#page/n197/mode/2up

I hope this helps!  Please feel free to post back if you're looking for more information.  And if you find anything more definitive, please share it with us!