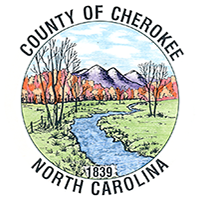 Cherokee County, located in the Mountain region of North Carolina and partially bordering the states of Tennessee and Georgia, is the state's westernmost county. It was formed in 1839 from Macon County and named for the Cherokee Indians who inhabited its lands before European settlement by Scotch-Irish, English, and German immigrants. Murphy, the county seat, was incorporated in 1851 and named for Archibald D. Murphey, one of North Carolina's most progressive political leaders, an advocate for internal improvements and other reform initiatives. Cherokee County's land includes large portions of the Nantahala National Forest, punctuated by the centrally located and enormous reservoir, Lake Hiwassee. This body of water was created by a Tennessee Valley Authority project, which constructed Hiwassee Dam between 1936 and 1940.

Cherokee County attractions include the Fields of the Wood, the assembly grounds for the Church of God of Prophecy featuring the world's largest Ten Commandments, written in concrete letters on the side of a mountain. Cultural institutions include the Cherokee County Museum and Cherokee County Arts and Historical Council. The county hosts a number of festivals and annual events, such as the Nation's Oldest Wagon Train on the Fourth of July, the Folk School Fall Festival, and Great Smoky National Railway excursion trips. Cherokee County had an estimated population of 25,600 in 2004.

For an annotated history of the county's formation, with the laws affecting the county, boundary lines and changes, and other origin information, visit these references in The Formation of the North Carolina Counties (Corbitt, 2000), available online at North Carolina Digital Collections (note, there may be additional items of interest for the county not listed here):

Index entry for the county: https://digital.ncdcr.gov/digital/collection/p16062coll9/id/290077

Michael Ann Williams, Marble and Log: The History and Architecture of Cherokee County (1984).