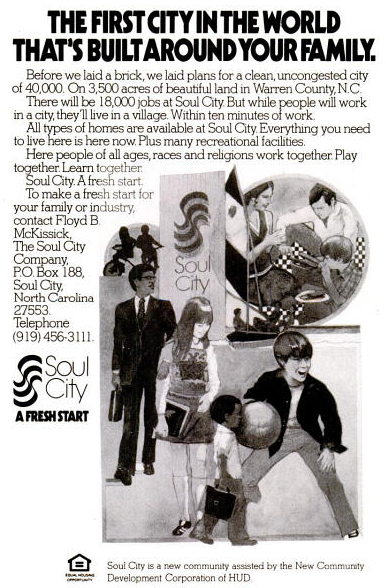 Soul City, a small town located one mile off U.S. 1 between Warrenton and Manson in Warren County, is a symbol of black economic aspiration fueled by the civil rights gains of the 1960s and 1970s. McKissick Enterprises, headed by civil rights activist Floyd B. McKissick (1922-91), financed the development of an African American community mainly with federal loan guarantees, grants, and contracts totaling $31 million from 1971 to 1978. With completion of the infrastructure, including a water treatment plant, hope abounded for the community's success. However, job-creating industries did not come, and housing construction dragged. The developer also faced damaging federal audits and political opposition, eventually defaulting in 1980.

Although the federal government foreclosed on the Soul City project, the community continued to grow. In the mid-1980s the Z. Smith Reynolds Foundation gave a grant of $20,000 to renovate the historic Green Duke House and turn it into a Jobs Link Center. By the early 2000s Soul City was a 5,000-acre development with a few hundred occupants and assets that included a fire station, a janitorial supplies manufacturer, a poultry-processing plant, the Healthco Clinic, the Floyd McKissick Assisted Living Center, a Head Start preschool center, and recreational facilities.

Osha Gray Davidson, The Best of Enemies: Race and Redemption in the New South (1996).

I grew up in Soul City and

I grew up in Soul City and was living in the area before Floyd McKissick came to the area in his attempt to build a city in the rural county. I am thankful to Floyd B. McKissick and his wife Mrs. Evelyn McKissick for their efforts. They really had a profound impact on the area and will be loved and missed by all who encountered them. Soul City was a great effort that was single handedly taken down by Jesse Helms who vowed to destroy Soul City but never the less the families of many folk still live in what was and is Soul City. It was not a failure just didn't come to fruition as quick as planned. Soul City lives on. John Bullock MPA