(originally published in the Encyclopedia of North Carolina as "Haliwa Indians." Title updated 2018). 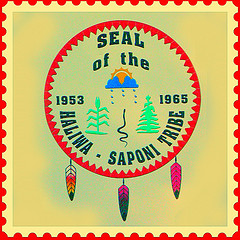 The Haliwa Indians were recognized as a tribe by the North Carolina legislature in 1965. The tribal name is a combination of Halifax and Warren Counties, where the majority of the Haliwa live. One tradition relates that the present Indian communities in this area were founded by wounded survivors of the Tuscarora War and other colonial conflicts who were unable to rejoin their original tribal groups. In addition to North Carolina coastal tribes, Accomac, Cherokee, Nansemond, Occaneechi, Saponi, Tuscarora, and Tutelo Indians are claimed as Haliwa ancestors. Since 1975, the Haliwa have referred to themselves as the Haliwa-Saponi.

In the late 1940s a group of Indians in northeastern North Carolina formed the Haliwarnash Croatan Indian Club, a name simplified shortly thereafter to the Haliwa Indian Club.  The change also reflected the deletion of Nash County as most of the enrollees lived in Halifax and Warren Counties.  Subsequently, to bolster their claim for recognition, the tribe appended to their name the suffix Saponi, to reflect tribal ancestral ties to the Sappony tribe.  The name Saponi means “red earth people,” and that phrase had been used in several contexts by the Haliwa-Saponi.

Although Indians were living in this area before the American Revolution and some served as soldiers in that war, the emergence of the Haliwa with a collective Indian identity has been relatively recent. The Haliwa Indian Club was organized in the 1950s, and its membership roll became the arbiter of Indian identity. As they were for other state-recognized tribes in North Carolina, schools and churches were important in strengthening Haliwa group identity, although a separate Haliwa school was not established until 1957.

W. R. “Talking Eagle” Richardson led the retribalization effort among the Haliwa-Saponi.  Richardson returned to North Carolina from Philadelphia in 1955 and was elected the tribe’s first chief.  He was instrumental in the founding in 1971 of the North Carolina Commission on Indian Affairs.  Leadership has placed emphasis on tribal self-sufficiency, preservation of tribal culture, and improvement of the quality of life for members.

In 1965, when the Haliwa became a state-recognized Indian tribe, nearly 400 persons successfully brought suit in Halifax County court to change the racial designation on their birth certificates, marriage licenses, and driver's licenses to "Indian." In the early 2000s there were approximately 3,000 Haliwas living in Halifax and Warren Counties. The tribe holds an annual powwow in April and conducts a number of economic and educational programs for its members.

As on 2018 the tribe consists of 4,300 enrolled tribal members, of which sixty-two percent live on the Warren and Halifax County border.  Another 1,898 members reside in Halifax County in Brinkleyville Township and 887 live in Warren County in Fishing Creek Township.  In recent years Haliwa-Saponi enrollees, living in Halifax County around the community of Hollister, have operated a host of businesses, including restaurants, floral shops, garages, and real estate offices.

Alfred Tamarin, We Have Not Vanished: Eastern Indians of the United States (1974).