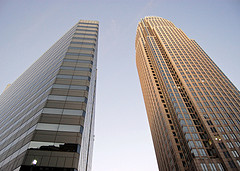 The Independence Building, which stood on the northwest corner of "The Square" (the intersection of Trade and Tryon Streets) in uptown Charlotte, was the first steel-frame high-rise building in North Carolina and, at 12 stories, is considered to have been the state's first true "skyscraper." The building was designed by architect Frank Pierce Milburn, completed in 1908, and named the Realty Building-a symbol of Charlotte's "New South" image. The building became known as the Independence Building following the founding of the Independence Trust Company in 1912.

Beginning with the Great Depression and continuing into the 1970s, the Independence Building was faced with considerable tenant turnover, as occupants moved to more modern buildings. On 30 Apr. 1976 all floors above the first were closed off, and two years later the building was placed on the National Register of Historic Places. In July 1981 Faison Associates (headed by Henry Faison) bought the property and announced plans to demolish the structure and build Independence Center-an office, retail, and hotel complex-on the site. On a Sunday morning in September 1981, the Independence Building was imploded in seven seconds.