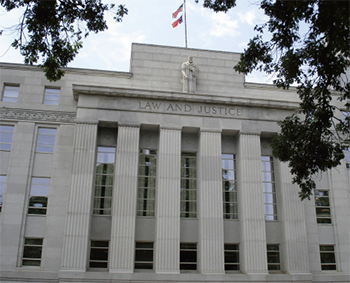 When North Carolina became a state in 1776, the colonial structure of the court system was retained nearly intact. The Court of Pleas and Quarter Sessions, the county court that existed from about 1670 to 1868, was still held by the assembled justices of the peace in each county. The justices, appointed by the governor on the recommendation of the General Assembly, were paid from fees charged to litigants. On the lowest level of the judicial system, justices of the peace held magistrate courts of limited jurisdiction, singly or in pairs, when the county court was out of term.

The Constitution of 1776 empowered the legislature to appoint judges of the North Carolina Supreme Court. The state judiciary began in 1777 with legislative authorization of three superior court judges and the creation of judicial districts. Sessions were supposed to be held in the court towns of each district twice a year. At that time, the terms "supreme court" and "superior court" were interchangeable. From its inception, the judicial system prompted complaints and demands for reform. Infrequency of sessions, conflicting judicial opinions, an insufficient number of judges, and no means of appeal were some of the problems cited, although the absence of a real supreme court was considered the greatest weakness.

In 1779 the General Assembly required the superior court judges to meet in Raleigh as a court of conference to settle cases the district courts could not resolve. Subsequent legislation directed the justices to put their opinions in writing to be delivered orally in court. The court of conference was changed in name to the supreme court in 1805 and authorized to hear appeals in 1810. In 1818 an independent three-judge supreme court (raised to five in 1868, reduced to three in 1875, and returned to five through a voter-approved constitutional amendment in November 1888) was created to review cases decided at the superior court level. Meanwhile, semiannual superior court sessions in each county were made mandatory in 1806, and the state was divided into six circuits, with six judges sitting in rotation and two judges constituting a quorum. The county court of justices of the peace continued as the lowest court and as the agency of local government.

The North Carolina Constitution of 1868 implemented major changes to modernize the state judiciary and make it more democratic. The county court's control of local government was abolished. Capital offenses were limited to murder, arson, burglary, and rape, and the constitution stated that punishments were intended not only to satisfy justice but also to reform the offender and thus prevent crime. Appointment of supreme court justices and superior court judges was transferred from the General Assembly to the voters, with vacancies filled by the governor until the next election. The Court of Pleas and Quarter Sessions was eliminated; its responsibilities were divided between the superior court and the individual justices of the peace, who were retained as separate judicial officers with limited jurisdiction. In 1875 the General Assembly was empowered to appoint justices of the peace.

Most of the modernizing changes in the 1868 constitution endured, and the judicial structure continued without systematic modification through most of the twentieth century. During these years legislative enactments resulted in gradual changes and additions to the state court system, which by the 1960s consisted of four levels: the supreme court, with appellate jurisdiction; the superior court, with general trial jurisdiction; the local statutory courts, such as county, municipal, and township recorder's courts, domestic relations courts, and juvenile courts; and justices of the peace and mayors' courts with limited jurisdiction.

The need for a comprehensive evaluation and revision of the court system received the attention and support of Governor Luther H. Hodges in 1957, and he encouraged the leaders of the North Carolina Bar Association to pursue the matter. In late 1958 the Court Study Committee, established as an agency of the association, issued a report proposing reorganization. A legislative Constitutional Commission, working with the Court Study Committee, submitted a similar report in early 1959. Both groups called for the establishment of an all-inclusive court system to be directly state-operated, uniformly organized throughout the state, and centralized in its administration. An important part of the proposal was that the local statutory courts be replaced by a single district court. Further, the office of justice of the peace should be abolished and the new position of magistrate created within the district court. 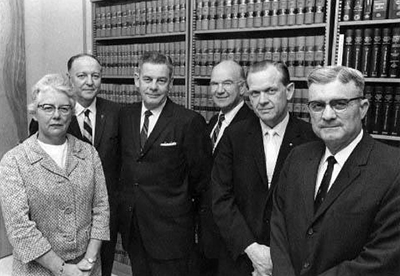 Constitutional amendments introduced in the legislature of 1959 failed to gain the required three-fifths vote of each house. The proposals were reintroduced and approved by popular vote in 1962, and in 1965 the General Assembly enacted laws to enforce the new system in stages. By 1971 all of the county courts had been incorporated into the new General Court of Justice, established by the Constitution of 1971. This designation of the entire judicial system as a single, statewide court, with components for various types and caseload levels, was adapted from the seventeenth-century General Court of North Carolina.

Also new to the court system was the Administrative Office of the Courts, created by the 1965 General Assembly to maintain an efficient court system and develop a single budget covering the whole judicial system and its employees. The office is responsible for directing the nonjudicial, administrative, and business affairs of the judicial branch. Its functions include fiscal management, purchasing services, personnel services, information and statistical services, appointment of legal guardians, supervision of record keeping in the trial court clerks' offices, liaison with the executive and legislative departments of government, and administration of programs that provide legal representation to indigent persons.

By the early 2000s the North Carolina court system featured a supreme court (a chief justice and 6 associate justices), a court of appeals (15 judges in rotating panels), superior courts (one or more judges for each of 46 districts), district courts (one or more judges for 40 districts), magistrates, district attorneys (one for each of 39 districts), and 100 clerks of superior court (one for each county). Since the 1970s the selection of judges has been controversial. Although judges have continued to be elected by popular vote, lawmakers have proposed constitutional amendments that would have the legislature appoint judges according to merit. The proposed amendments have received a majority backing but not the three-fifths required to submit constitutional amendments to popular vote.