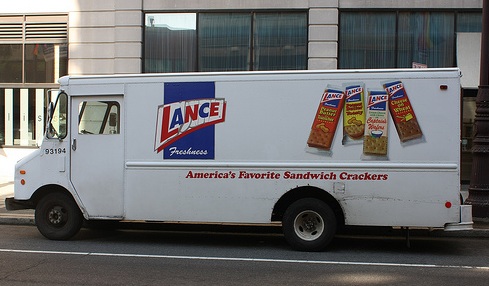 Lance, Inc., a major producer of packaged crackers, potato chips, cookies, nuts, and other snacks, started in 1913 when Philip L. Lance, a Charlotte coffee salesman, purchased 500 pounds of Virginia peanuts for a customer who subsequently decided he could not use them. Reluctant to return the peanuts to the farmer, Lance took them home, roasted them, and sold them for a nickel a bag.

Lance and one of his associates in the food brokerage business, his son-in-law Salem Van Every, founded the Lance Packing Co. The peanut-roasting business outgrew the Lance home and moved to College Street in Charlotte. A mechanical roaster was installed, leading to the manufacture of peanut butter. To demonstrate the quality of his new product, Lance, with the help of his wife and daughter, spread it on crackers, creating the first commercially sold peanut butter cracker. These became very popular with soldiers at Charlotte's Camp Greene during World War I.

Sales of Lance's peanut butter products increased, along with the growth of its mail-order business. The company moved its facilities to Ninth Street and then to South Boulevard in 1926, the same year in which Philip Lance was killed in an automobile accident. A corporation was formed subsequent to Lance's death.

Lance Packing began making its own crackers in 1938, and the firm name was changed to Lance, Inc., the next year. When Van Every died in 1943, his son Philip took over as president and reorganized sales and distribution on a district basis with sales managers in key areas. Lance became a publicly traded company in 1961. In 1962 the company moved its facilities farther out South Boulevard to a 275-acre tract.

In 1988 Lance began producing a number of products low in saturated fats and cholesterol, and in 2004 the company removed all trans fats from its cracker and cookie selections. Lance vending machines can be found at more than 60,000 locations in 40 states from the Atlantic Coast to the Rocky Mountains. The company maintains manufacturing facilities in Charlotte as well as Burlington, Iowa; Hyannis, Mass.; and Ontario, Canada. It has approximately 4,200 employees and $600 million in yearly sales. Marketing efforts have included new packaging, the introduction of new cookies and other products, and an amusing radio advertising campaign featuring the phrase, "I've got Lance in my pants!"

Doug Mayes and Nancy Stanfield, Charlotte: Nothing Could Be Finer (1996).