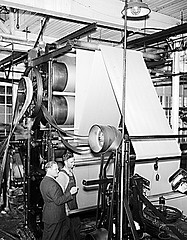 Manufacturing has been a diverse and vital component of North Carolina's economy since the early nineteenth century. Initially, farming or planting was widely seen as the most profitable business opportunity, and industrial investment and interest tended to arise only during periods of agricultural depression. Early manufacturing activity was meager, the result of the state's few easily exploited deposits of minerals such as iron and coal, its modest and somewhat inconstant waterpower sources, and its lack of capital. North Carolina soon became an industrial force, however, with much of its industry centered around furniture, textiles, and tobacco. Despite troubling economic trends affecting its industries, and seemingly in contrast to the predominately rural character of many of its counties, North Carolina in the early 2000s remained one of the nation's ten most industrialized states.