The North-Carolina Museum was one of the names 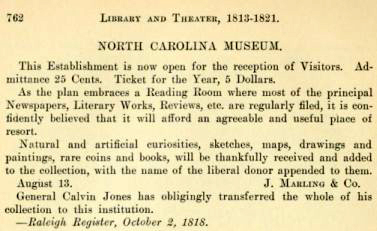 associated with a short-lived effort in Raleigh in the 1810s to gather and display an assemblage of natural and manufactured objects, curiosities, and works of art. It was also referred to as the Raleigh Museum, and sometimes in newspaper notices simply as "the Museum." Later writers have called it Marling's Museum, because the name of artist Jacob Marling (1774-1833) is most often associated with the effort. In 1818 Marling constructed a building to house his collection on the north side of East Martin Street, some 80 feet east of Fayetteville Street. Marling had advertised in May 1815 his intention of opening a "Museum and Gallery," for which he had "commenced collecting whatever is rare and curious, in the production of nature," as well as art and literature.

Associated with the museum during part of its short existence was a public reading room and library. Marling had extended an invitation for people to deposit in the museum collection "articles worthy of notice" that they might have found "in their excursions." Gen. Calvin Jones of Raleigh was one of those who some months later "transferred the whole of his collection to this institution." Meanwhile, Marling began constructing on the Martin Street lot a building designed for exhibiting the collections. In August 1818 he pronounced the North-Carolina Museum open. The admission price was 25 cents and tickets for the year cost $5. Marling again invited individuals to contribute "natural and artificial curiosities, sketches, maps, drawings and paintings, rare coins and books," promising to append to those exhibited "the name of the liberal donor."

It is unclear why or when Marling closed or lost the museum, but transfer of the loaned collections to another location and to other proprietors may have begun as early as 1819 based on newspaper accounts and advertisements. The reading room apparently continued for a while after that date.