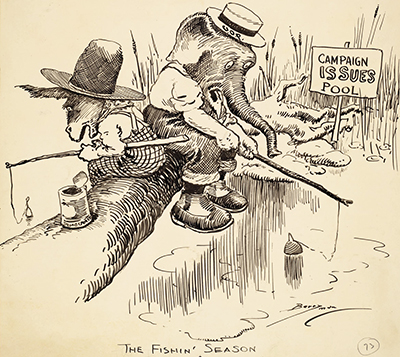 Political parties of all kinds have vied for control of North Carolina's government from the earliest years of the republic, although most of the time only the Democrats and Republicans have achieved meaningful success. In 1787 the state's first parties clashed over the adoption of the federal Constitution. The Anti-Federalists, believers in state rights who feared that a strong central government would threaten individual liberties, prevailed over the Federalists, who argued that a powerful national government would bring order and prosperity. Due to the strength of the Anti-Federalists, North Carolina did not ratify the U.S. Constitution until November 1787, being the next-to-last of the 13 original colonies to do so. This victory heralded the ascendancy of the Federalists, led by William R. Davie, James Iredell, and Hugh Williamson. In the late 1790s, however, the Federalists became the minority party in North Carolina, giving way to Jeffersonian Republicans (later known as Democrats). After the War of 1812, the Federalist Party collapsed. Under the direction of Nathaniel Macon, North Carolina Jeffersonian Republicans, with their economic focus on agriculture rather than industry and their emphasis on limited federal power and expenditures, dominated state politics well into the 1830s.

Between 1833 and 1837, during Andrew Jackson's second term as president, a new Whig Party formed to oppose Jackson's antibanking and other policies. Adopting a program emphasizing internal improvements and economic development, conceived by state legislator Archibald D. Murphey, the Whigs soon gained a narrow edge over the Democrats in North Carolina, an edge they generally maintained into the early 1850s. Under such leaders as William A. Graham and Willie P. Mangum, the Whig Party even convinced the Democrats to drop their opposition to the increasingly popular program of state-funded internal improvements such as railroads, turnpikes, and canals. After the collapse of their national organization in the early 1850s, North Carolina Whigs vainly tried to reorganize under labels such as the American and Constitutional Union Parties but could not regain their former dominance. Democrats again garnered the balance of power in the state.

The coming of the Civil War led to a period of one-party rule, as enthusiasm for secession and North Carolina's entry into the Confederacy temporarily erased old party differences. The pro-war Democrats, or "Destructives," as their opponents labeled them, did not hold power for long. Party differences soon reemerged, as opponents of the original supporters of secession formed a new, loosely organized Conservative Party. Led by popular former Whig Zebulon B. Vance, the Conservatives gained control of the state government in 1862 and retained it for the duration of the war. During Reconstruction, Vance's pro-Confederate Conservative supporters increasingly cooperated with the Democrats, eventually uniting under the old Democratic banner. Their new opponents were northern-backed Republicans, whose ranks included recently enfranchised African Americans as well as northern carpetbaggers and native white scalawags, mostly former Unionists. The Republicans, led by Governor William W. Holden, briefly controlled the state after the party's formation in 1867 until they lost control of the General Assembly in 1870. Holden was impeached and removed from office the following year, and the Conservative/Democratic Party, determined to restore white supremacy in the state, clearly asserted its power.

Except for a brief period in the 1890s when a "Fusion" of Republican and Populists temporarily wrested control away from them, Democrats would essentially rule the state for a full century. North Carolina's long-interrupted tradition of two-party politics returned at the end of the twentieth century. In the 1970s North Carolinians elected James E. Holshouser, the state's first Republican governor of the century, as well as Republican U.S. senator Jesse Helms, who would go on to win reelection four times. The Democratic Party, under the leadership of four-term governor James B. Hunt Jr., remained a primary political force in the state, although the majority of voters supported Republican presidential candidates in every election but one from 1972 to the mid-2000s. This trend was also observed in other states of the once staunchly Democratic "Solid South."

In addition to Democrats and Republicans, other parties and movements have influenced North Carolina politics, including the Progressives of Theodore Roosevelt in 1912, the States' Rights Party (Dixiecrats) of 1948, and the American-Independents of George Wallace in the 1960s. By the early 2000s several "non-mainstream" political parties attracted adherents-among them, the Communist Party, the Green Party, the Libertarian Party, the Natural Law Party, the Southern Party, and the Reform Party.