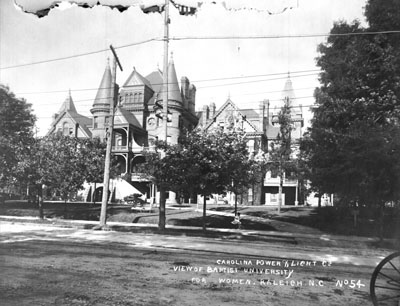 In the early twentieth century, as the state's public school system began to emerge in earnest, the Roman Catholic Church became a major influence in private education in North Carolina. Often shunned by their Protestant neighbors, Catholics developed a strong alternative educational system that emphasized religious doctrine and discipline, eschewing public schools' perceived secular, or Protestant, orientation. As Catholics grew in number and influence across the South, they built schools to provide their children with a common cultural base. Many schools founded in this period remain in operation, including Charlotte's St. Patrick's Catholic School (originally organized in the late 1800s as O'Donoghue Catholic School), Raleigh's Cardinal Gibbons High School (1909), Hendersonville's Immaculata School (1926), and Burlington's Blessed Sacrament School (1930).

Despite the development of many notable institutions, by the mid-twentieth century private education in North Carolina and the rest of the South lagged far behind the national average. Most citizens were unable to afford any alternative to public schools; furthermore, most people believed that the public schools could provide quality education, reducing the need for private schooling. For many white North Carolinians, this faith in the public schools was undermined by the U.S. Supreme Court's 1954 decision in Brown v. Board of Education of Topeka, Kansas outlawing segregation in public education. The state's white leadership, with widespread white support, sought to stop integration with the Pearsall Plan, which gave local citizens the right to close down public schools if faced with desegregation and provided state tuition credits for any white child to attend private schools. The plan also authorized the state to set minimum standards for private schools in terms of teacher certification, curriculum, class size, safety and health requirements, and length of school day and year.

Over the next 20 years, the growth of private education in North Carolina correlated directly with the progress of desegregation and the percentage of blacks in a particular area. For ten years following the Brown ruling, few public schools were integrated, and the number of private schools remained relatively constant. In the 1964-65 school year, fewer than 9,500 students attended 83 private schools. But beginning in that year, the U.S. Department of Health, Education, and Welfare began aggressively to enforce the 1964 Civil Rights Act, which prohibited segregation in any program that accepted federal funds. As desegregation progressed, white private schools sprang up across the state, especially in eastern North Carolina's Black Belt, where blacks constituted a majority or near-majority of the population. In the three years between 1968 (when the U.S. Supreme Court demanded immediate public school integration) and 1971, the number of students attending private schools in the state more than doubled, from less than 20,000 to more than 47,000; the number of private schools ballooned from 108 to 235.

Contemporary critics dubbed these new private schools "segregation academies" and "the schools that fear built" because they appeared to be motivated by white disdain for school integration. Not all private schools, of course, were the products of racial fear. Many older ones voluntarily agreed to integrate. Other private institutions, such as the Carolina Friends School in Durham, were established specifically to provide quality education in an integrated setting. Yet the majority of white families that supported these private schools were reacting to perceived changes in American life that they found disturbing, including race relations, the increasingly secular nature of public discourse, the permissive culture encouraged by 1960s liberalism, and impersonal economic and social relationships. In the face of such upheaval, parents sought to create cultural buffer zones around their children via private schools.

As the 1970s wore on, the growth of private education in North Carolina stabilized, and the new academies became entrenched in their communities. Many new schools were "Christian academies" that emphasized evangelical Christian doctrine as part of their curricula. Like their Roman Catholic counterparts earlier in the century, these Protestant schools sought to provide a moral and religious foundation for children growing up in an increasingly secular world.

The 1990s witnessed tremendous growth in private education in North Carolina. At the beginning of the decade, about 53,000 students attended 463 private preparatory schools in the state; by 2001-2, 91,817 students attended 653 schools, 71 percent of which were classified as "religious" by the North Carolina Division of Non-Public Education, part of the Department of Administration. This growth can be traced both to the continuing dissatisfaction with public education as well as North Carolina's increasing economic prosperity.

Other significant movements in private education have been the growing number of children who are homeschooled in the state and the debate over the implementation of a school voucher system to help parents pay for private schooling if their public school alternatives are lacking. Advocates of vouchers claim they would increase the educational choices of poorer children in "troubled" schools, while opponents argue they would severely damage the public school system and essentially use public funds to benefit private, often religious, institutions.