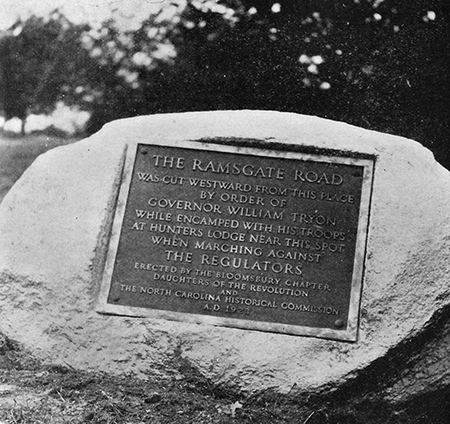 Ramsgate Road, afterward corrupted into "Ramcat Road," was constructed by militiamen from Johnston and Wake Counties in about one week in May 1771 as a military road following an older Indian trail. Its purpose was to expedite the movement of equipment from Granville County to Hillsborough to suppress the Regulators. Its construction in so short a time was regarded as a remarkable accomplishment. The road was named for the one followed by Canterbury Pilgrims in England's County of Kent; it had been rehabilitated in 1749 leading to Ramsgate, a Harbor of Refuge for the Downs, a region similar to the North Carolina coast. North Carolinians undoubtedly felt that they had done the same with one of their old roads.

The Indian trail is shown on the John Collet map of 1770 and the Henry Mouzon map of 1775. Ramsgate Road is designated in an illustration of the Mouzon map in the North Carolina Booklet (1926).