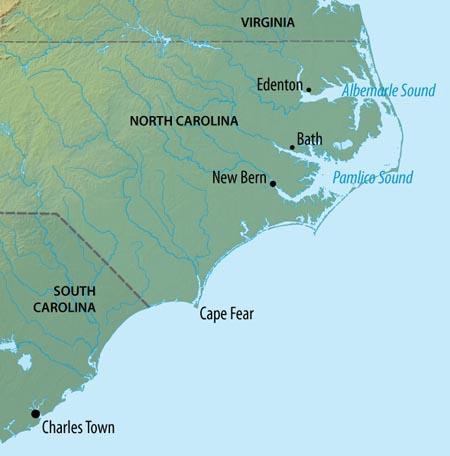 Although there had been earlier attempts at settlement by the Spanish and English, the first permanent colonies in North Carolina took hold during the mid-seventeenth century and were scattered along the sounds, rivers, and creeks north of Albemarle Sound, a region then claimed by Virginia. The early settlers were primarily English merchants, traders, and farmers from the Jamestown area seeking better opportunities and freedom from taxation. Among them were small numbers of Irish, Scotch-Irish, and Welsh immigrants. Their southern advance was slow and the date of onset obscure. Some colonists arrived with slaves, and records indicate that lands were sometimes granted or sold by local Indians.

Throughout this period, access to unclaimed land was most easily and therefore most frequently accomplished by way of water-the sounds and navigable rivers. Thus, the greatest concentration of early settlements occurred along Albemarle Sound and the Pamlico, Neuse, and Trent Rivers and their tributaries (the Tidewater), giving rise to the state's first established cities: Bath (1705), New Bern (1710), and Edenton (1722). Settlers moving up the Cape Fear River founded Brunswick (ca. 1725), soon to be eclipsed by its upriver rival, Wilmington (ca. 1733). As land near the coast became less available, colonists moved west into the interior along rivers and creeks, reaching the Eno River by about 1735.

By 1663 about 500 people lived between Virginia and Albemarle Sound; by 1675, around 4,000 were situated there. The coastal population in 1730 has been estimated at about 36,000 (including about 6,000 blacks); nonetheless, North Carolina remained the most sparsely settled English colony on the continent. Aside from a few Lowland Scots and Welsh, the majority of settlers throughout the Proprietary period (1663-1729) continued to be English. French Huguenots also located along the upper Neuse River beginning in the 1690s, and German Palatines and Swiss inhabited New Bern from its founding.

With the suppression of piracy and the ending of local Indian wars by 1720, the rate of settlement west of the Coastal Plain accelerated dramatically, continuing throughout the royal period (1729-75) but temporarily slowing down during the French and Indian War (1754-63). Beginning around 1730, migration into the region proceeded largely along two popular routes: northward into the Piedmont and southeast Coastal Plain by way of the Cape Fear River Valley (which had been unsettled until 1667), and southward into the western backcountry via the Great Wagon Road. Some settlers entered the Cape Fear region by way of the "100-mile road" from the vicinity of New Bern.

Among the largest groups traveling north along the Cape Fear River were the Highland Scots, many of whom moved into the region now centered around Fayetteville after 1732. This became the greatest concentration of Highland Scots in America. In a short time, their settlements lay throughout the Upper Cape Fear region today comprising Anson, Bladen, Cumberland, Harnett, Hoke, Moore, Richmond, Robeson, Sampson, and Scotland Counties. At this time a smaller group of Welsh immigrants settled primarily west of the Northeast Cape Fear River in parts of modern-day Pender, Duplin, and Sampson Counties.

Coincident with the Highland migration were those of Scotch-Irish and Germans. Utilizing the Great Wagon Road through the Shenandoah Valley of Virginia, they came predominantly from Pennsylvania, but also from New Jersey, Maryland, and Virginia. Most were second- and third-generation farmers and merchants seeking land, tax relief, and, in some cases, greater religious freedom.

The Scotch-Irish (sometimes called Ulster Scots) moved into the North Carolina backcountry, the Piedmont, and onward to South Carolina beginning around 1735. They were highly literate, self-reliant, and industrious, exerting a tremendous influence on the history of the state. By the 1740s Scotch-Irish had settled along the Haw and Eno Rivers, and about 24 years later they were reported west of the Yadkin.

German immigrants, taking much the same route, belonged mainly to Lutheran, Reformed, and Moravian sects, the last comprising the largest and most significant group during the first stages of settlement. Renowned as superior farmers, they located first in present-day Rowan County, then in Cabarrus, Stanly, Union, Mecklenburg, Lincoln, Davie, Davidson, Catawba, and Burke Counties. The Moravians began to arrive in 1753, one year after a party of Moravian brethren from Pennsylvania purchased a tract of land in modern-day Forsyth County.

The peak period of the settlement of North Carolina lasted from about 1730 until the American Revolution. By 1830 settlement of the entire state was essentially complete.