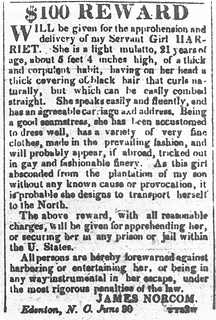 Slave narratives, firsthand accounts of African Americans who experienced slavery, are essential tools in the study of American history and literature and have played a central role in national debates about slavery, freedom, and American identity. The recorded experiences of African American slaves are also arguably one of North Carolina's greatest contributions to American literature as a whole. Following emancipation, the autobiography was the most popular literary tool of black writers; slave narratives outnumbered novels written by African Americans until the Great Depression. Along with their fictional descendants, the state's slave narratives continue to challenge readers to explore questions of race, social justice, and the meaning of freedom.

Narratives of the antebellum period, usually written by fugitive slaves, focused primarily on the experiences of African Americans held in bondage in the South. Many antebellum narrators depicted slavery as a condition of extreme physical, intellectual, emotional, and spiritual deprivation. Their accounts stirred dialogue between blacks and whites about slavery and freedom, as former slaves wrote both to enlighten white readers about the realities of institutional slavery and to convince them that the black people were deserving of full human rights.

Published slave narratives began to appear throughout the English-speaking world in the late eighteenth and early nineteenth centuries through the efforts of abolitionists, and a significant number sold in the tens of thousands. The autobiographies of Frederick Douglass, William Wells Brown, and Harriet Jacobs (a native of Edenton) were some of the most influential slave narratives of the antebellum period. Jacobs's autobiographical Incidents in the Life of a Slave Girl: Written by Herself (1861) contributed extensively to the study of African American women's slave experience. The book is considered one of the two most important American slave narratives-Narrative of the Life of Frederick Douglass: An American Slave (1845) is the other-as well as one of the most significant canonical works of African American literature.

Dismissed by many whites as antislavery propaganda, such narratives provide eyewitness accounts of personal struggles, sorrows, aspirations, and triumphs during slavery. They reveal the complex relationship between white master and black slave, in addition to the tremendous efforts of blacks to build and shape their personal lives and communities. Many ex-slaves escaped to the North only to find that their concept of freedom clashed with the reality of racism in the so-called free states. The struggles of former slaves as free citizens of color in the North increasingly appeared in narratives of the 1840s and 1850s.

Former slaves continued to record their experiences after the Civil War. In part, they wanted to ensure that the reunited nation did not forget the evils of the institution that had threatened its existence. When white southern writers and regional boosters of the 1880s and 1890s nostalgically recounted the myths of slavery and "the moonlight-and-magnolias" plantation to northern white audiences, the narratives of ex-slaves were among the few accounts providing a reliable, firsthand portrayal of what slavery had actually been like.

Slave narratives written after emancipation often depicted slavery as a trial wherein the resiliency, industry, and ingenuity of the slave was tested and ultimately validated. Thus, some newly freed African Americans used the genre to argue their capability and readiness to participate in the post-Civil War social and economic order. Booker T. Washington's Up from Slavery (1901) is probably the most famous example of the late nineteenth- and early twentieth-century slave narrative.

In the 1930s the Federal Writers' Project, a New Deal program commissioned by the Works Progress Administration (WPA), conducted interviews with formerly enslaved African Americans. The accounts of 176 former slaves provided rare, firsthand reminiscences of slave life in nineteenth-century North Carolina. Although most of the subjects were young during the Civil War, many were able to recall their living conditions under slavery. One woman said that she and her family faced constant hunger, forcing them to steal from their master. Her clothing was also inadequate: she and other slaves received only one pair of shoes a year; when the shoes wore out, they went barefoot. Education on her plantation was strongly discouraged, and any slave found with a book would be sold as punishment.

North Carolina's slave narratives portray the sexual exploitation of black women by white owners as one of the most horrific aspects of slavery. Several WPA interviewees corroborated this testimony. One woman, recalling her master's penchant for carnal interludes with his female slaves, told an interviewer that slaves on her plantation called such men "Carpet Gitters."

Treatment by slaveholders varied. One former slave recounted that one night his mother was taken from her bed and sold without his knowledge. On another occasion he was tied to a tree and brutally beaten until blood flowed down his back. A woman recalled being publicly flogged after she broke some of the master's dishes. Other plantations owners vehemently opposed physical abuse and refused to divide families through sale. Some owners allowed social outlets for their slaves, such as religious meetings, corn shuckings, and dances; others taught their slaves to read and write. Varied accounts of slave quarters also exist: some were comfortable, others Spartan. A few freedpeople looked back on slavery with a sense of loss. One woman lamented the absence of slavery's cradle-to-grave care, while a man recalled his mother claiming that "her master was better than other folks."