The First Carolinians: North Carolina Before 1770

For almost 500 years, people of European and African descent have inhabited a land now called North Carolina. Richly varied, it extends from the eastern edges of the Mississippi River basin in the Appalachian Mountains to the remarkable barrier islands known as the Outer Banks. Mount Mitchell, near the Blue Ridge Parkway in Pisgah National Forest, is the highest elevation in the eastern United States. Here northern hardwoods mingle on the steep slopes with a bewildering variety of southern flowers and shrubs. Less than 500 miles east, at Cape Hatteras, a venerable lighthouse surveys the flat but treacherous coastline. Here the warm waters of the powerful Gulf Stream bring mild, and occasionally stormy, weather to the low-lying coast. Between the rugged Blue Ridge and the broad Coastal Plain, stretching roughly from modern-day Morganton to Raleigh, lie the rolling foothills that colonial settlers called the Carolina Piedmont. 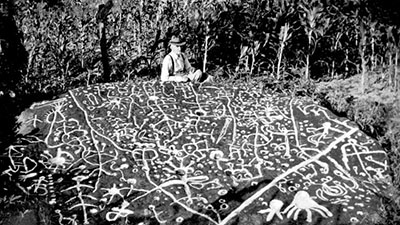 Perhaps the best way to begin the study of North Carolina Indian history is by listening to the Indians themselves. One such story comes from the Tuscarora Indians, who lived in the vicinity of the Neuse River. The legend records a long, icy migration from a land far to the west. It was told to a modern Tuscarora man by his great-grandmother.

In the old world, the legend says, there was a long famine. Nothing would grow and people were starving. Finally the people held a council meeting. The council decided that the people had to leave their homeland for a new place, where they could find food. ...After walking some distance, the people realized they were walking on ice. For days they walked on ice. One group got tired and decided not to go on. The other group decided to keep walking -- to "where the sun rises" -- until they found food. At last they stopped. Ahead of them was a black streak, which they thought might be a huge snake. For safety, they spread apart within hearing distance of one another. When the persons in front reached the streak, they learned it was not a snake, but a lush forest with abundant food. The message was relayed to the end of the line, and the group fathered at the forest. They found so much food that they decided to send for the others. But when they returned to the west, they discovered that the ice had melted. At the place where they had crossed, they saw only water. They had no way to reach their friends.

Another North Carolina tribe, the Cherokees, tell a similar story. Like the Tuscarora tale, it includes a long, eastward migration prompted by starvation. It even describes life in the north, wearing snowshoes and enduring the long darkness of subarctic winters.

Modern archeologists also think the ancestors of the North Carolina Indians may have migrated from the west. Although their theories vary considerably, most scholars agree on one fact: the predecessors of the American Indians at some time crossed a land bridge between Asia and America. Some say the first crossing, toward "where the sun rises," took place more than 30,000 years ago. Indeed, it could have occurred as much as 70,000 years ago, when the growing glaciers of the last ice age lowered the sea level enough to expose dry land at the Bering Strait. At the peak of the ice age's final phase, about 18,000 years ago, the land bridge from Asia to present-day Alaska may have been 1,000 miles wide. It clearly would have been possible for inhabitants of Asia to reach North America.

The first North Carolinians arrived over 10,000 years ago. These earliest North Carolinians are known as "Paleo-Indians." They lived in bands of no more than fifty people, staying in one place while they could and moving to find better food resources when necessary. Unfortunately, little evidence of these people survives. The environment they encountered was very different from what we know today. Glacial ice still lay over much of North America. Although too far south to be ice-covered, the North Carolina region was nevertheless quite cold and wet. Even the animal population differed. Huge animals, such as the mastodon, roamed the land alongside more familiar game, such as deer. 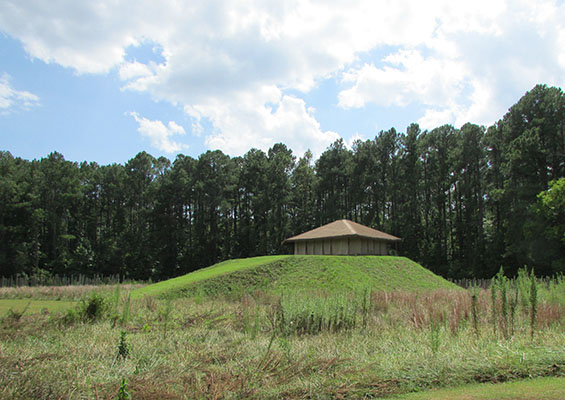 Thousands of years before settlers from Europe and Africa set foot on Carolina soil, another people inhabited the land. Termed "Indians" by Christopher Columbus, they were in fact the first Carolinians. Their history encompasses migrations the length and breadth of an immense continent, shattering invasions, and technological transformation.

By excavating skeletal remains in ancient burial grounds, archeologists have determined that people of the late Woodland period were the ancestors of tribes, such as the Catawba, who lived in North Carolina at the time of European contact. Although they shared a common Woodland background and spoke related languages, each of the various groups across the North Carolina piedmont had developed distinctive cultural traits. Scholars have found a great variety of linguistic traditions among North American Indians. While the Piedmont tribes spoke Siouan languages, other North Carolina tribes had Iroquoian and Algonquian linguistic heritages.

Even before the Siouan tribes of the Carolina Piedmont faced the main thrust of European invasion, they had had to conted with another invading threat. From the region of present-day Alabama and Georgia came a group of Indians from a culture later called "Creek." Although the precise reason for their northward migration remains a mystery, it is possible that famine or other troubles had disrupted life in their home country. The Creek contingent reached North Carolina sometime near 1450. In the southern part of the state -- present-day Richmond, Anson, and Montgomery Counties -- they up-rooted local Siouan tribes and settled in the lush Pee Dee River Valley. In this rich agricultural basin, they built dwellings, planted crops, and raised children for a hundred years. Then, just as suddenly as they had arrived, they were gone. Even before the English attempted to settle at Roanoke, the Creek invaders had been driven from North Carolina. The Siouan tribes of the Piedmont had reclaimed their homeland.

At Town Creek Indian Mound near Mount Gilead, North Carolina, visitors can view reconstructed remains of the Pee Dee Creek culture. The Creeks chose this high bluff overlooking the Little River for the site of their regional ceremonial center. Basketload by basketload, they hauled earth from nearby fields and a swampy area to the west. Finally, they completed an earthen ceremonial lodge and surrounded it with a palisade of upright logs. After much use, the earthen lodge collapsed. Once again the people of the Pee Dee collected earth, this time to cover the lodge's remains. The mound they created in covering the lodge became the foundation for their next construction: a ceremonial temple. But this building, like the first, was ill-fated. When it burned to the ground, the Creeks covered the remains as they had previously and built a third temple atop the growing earth mound. This third and final structure is the one visitors can see reconstructed at the site today.

Even before Raleigh's "lost colony," Europeans had explored the coast and the mountains. The first permanent newcomers were English migrants from Virginia, followed after 1715 by planters and slaves from South Carolina.

In the next half-century, thousands of German, Scotch-Irish, and Scottish settlers came by boat from Europe and by wagon from the North. Those who carved out farms in the piedmont had little in common with coastal planters or the backcountry elite of lawyers, judges, and merchants. By the late 1760s, western farmers organized as Regulators to protest unjust taxes, corrupt courts, and threats to private property—issues that would soon reappear as part of the patriotic rhetoric of the American Revolution.