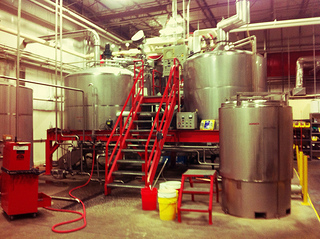 The brewing of beer in the region that would become North Carolina began long before the first Europeans arrived. According to John Lawson's A New Voyage to Carolina (1709), Native Americans made beer from cedar berries and corn. In The Natural History of North Carolina (1737), John Brickell observed that the Indians "likewise make Beer of Mollosses, or common Treacle."

The first English colonists in North America brewed beer in their settlement on Roanoke Island in 1585. An account written by one of the settlers reported: "Wee make of the same in the country some mault, whereof was brued as good ale as was to be desired." Beer was a mainstay of the colonial diet. Most brewing occurred in private homes and was often carried out by housewives, but taverns served local or country beer along with a few imports from England and some "Northward beer" from New York and Philadelphia. Commercial brewing was rare until the 1800s, although one resident of Old Salem advised in 1773 that "the distillation of strong drink should not be extended too much because beer is not only much more wholesom for our brethren but also neighbors would buy quantities of it." 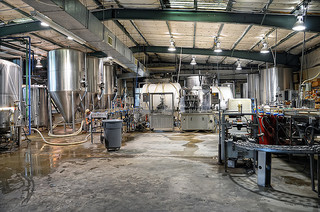 Brewing in North Carolina diminished significantly after the Revolutionary War for several reasons. Where transportation was poor, especially along the frontier, farmers found it easier to turn their excess grain into whiskey than beer. Whiskey kept better, took up less room, and could be carried in small bottles or flasks. In the 1840s the introduction and growing popularity of German lager beer-with its emphasis on lightness, dryness, and sparkle-along with technological advancement in the brewing process, revolutionized the industry. Large breweries in areas of significant German migration such as St. Louis, Milwaukee, and Cincinnati overwhelmed the small local producers of traditional English-style ales. In antebellum North Carolina growing racial tensions and white fears led the government to restrict African Americans' consumption and retailing of alcohol. During the Civil War the state outlawed all brewing to save grains for food.

The temperance and prohibition movements that swept across the state and country at various times severely limited beer production. County courts and later local governments restricted alcohol consumption and retail through licensing, fees, and prohibitions. In the 1870s the state legislature expanded the power of local option, and by 1881, 68 communities in North Carolina were described as "dry." In 1908 North Carolina became the first state to adopt Prohibition by a direct vote of the people, foreshadowing adoption of the Eighteenth Amendment to the U.S. Constitution in 1919. In 1933, 300,054 North Carolinians voted against repeal of the Eighteenth Amendment, compared to only 115,526 who cast ballots to support the successful national movement to end Prohibition. Responding to such strong temperance sentiments, the legislature returned to its policy of local option, experimenting with Alcoholic Beverage Control (ABC) programs as early as 1935.

After World War II, consumption of beer rose dramatically in North Carolina. A number of factors contributed to the skyrocketing demand for beer, including increased availability as more communities voted to allow beer sales, a high rate of migration into the state, a younger population, increased advertising, more tolerant attitudes toward alcohol, and higher incomes. By 1989 North Carolina had a higher per capita consumption of malt beverages than New York, and it collected more tax revenues from packaged beer as well.

Commercial brewing also returned to North Carolina in the second half of the twentieth century. In 1948 Atlantic Beer and Ale in Charlotte was the lone brewery in the state producing beer for sale and distribution, but by the 1970s the new Schlitz (later Stroh's) brewery in Winston-Salem became one of the top 20 most-productive breweries in the country. Miller opened a major new facility in Eden in 1976. In the 1980s and 1990s, North Carolinians participated in the microbrew trend in the brewing industry. Microbreweries-small breweries generally producing fewer than 15,000 barrels of beer and ale a year-and brewpubs, which produce and sell beer for consumption only on the premises, spread rapidly across the state. The success of these small, local establishments was accompanied by increased consumer demand for darker and heavier English-style beers like those popular 200 years before. By the early 2000s North Carolina's approximately 30 microbrewers had successfully reestablished many of the state's colonial brewing traditions.

Stanley Baron, Brewed in America: A History of Beer and Ale in the United States (1962).

Nowadays the demand of beer

Nowadays the demand of beer industry is increasing day-by-day. And therefore more and more people are starting their own beer manufacturing business and for that you need to take permission from Govt and take care of several other things.