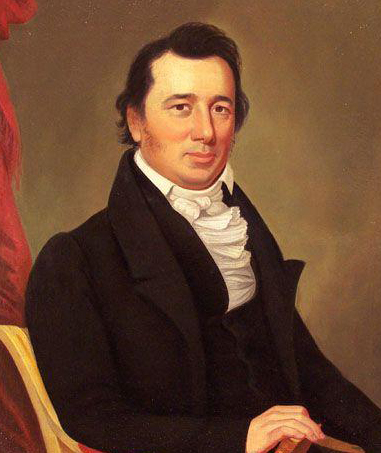 William Augustus Blount, landowner and soldier, was born in Washington, Beaufort County, the son of John Gray Blount and Mary Harvey. His father's possessions numbered hundreds of thousands of acres, a large portion of which were in Western North Carolina and what is now Tennessee. His grandfather was Captain Jacob Blount, paymaster of the North Carolina troops during the Revolution and an original member of the North Carolina Society of the Cincinnati.

When Blount was twenty years old, he volunteered to serve in the army at the outbreak of the War of 1812. He was commissioned a first lieutenant of the Eighteenth Infantry on 8 May 1812 and was promoted to captain on 4 Sept. 1813. During a part of his service he was stationed with the troops defending Charleston. Blount retired from the army at the close of the war on 15 June 1815. On 28 Nov. 1815, when he was only twenty-three years of age, he was elected major general of the Sixth Division, North Carolina Militia.

Blount was a large landowner and planter. His home was Meadowville Plantation, Chocowinty District, Beaufort County, and there he spent most of his life.

Blount represented Beaufort County in the 1825 state House of Commons and was reelected to serve in 1826 and 1827. He was elected a trustee of The University of North Carolina in 1826 and remained a trustee until his death more than forty years later.

Blount was devoted to the South. Age prevented his personal participation in the Civil War, but he spent his entire fortune in the furtherance of the southern cause. His only surviving son, Major William Augustus, Jr., was an aide-de-camp on the staff of General Lawrence O'Bryan Branch, C.S.A.; Branch married Blount's only daughter, Nancy Haywood.

Blount was twice married. His first wife was Nancy Haywood, the eldest daughter of Sherwood Haywood of Raleigh and a granddaughter of Colonel Philemon Hawkins of Warren County. The only children of this marriage were William Augustus and Nancy Haywood. After the death of his first wife, he married Anne Littlejohn, by whom he had no children. Blount was a member of the Episcopal Church.

The downfall of the Confederacy and the death of his son-in-law, General Branch, at the Battle of Antietam, were great blows to Blount; he did not long survive them. He died in the Branch house on Hillsborough Street in Raleigh and was buried in the Branch family plot of the old City Cemetery in Raleigh.