Isaac Edwards, attorney, private secretary and aide-de-camp to Governor William Tryon, member of the First Provincial Congress of 1774, deputy auditor of the province under Governor Josiah Martin, and ardent convert to the cause of colonial American rights, was the eldest son of Colonel Nathaniel Edwards (d. 1771), burgess from Brunswick County, Va., and deputy secretary of the colony (1770), and Jane Eaton Haynes Edwards, daughter of William Eaton (d. 1759) and Mary Rives of Granville County, N.C., and widow of Anthony Haynes. Isaac Edwards was also the grandson of John Edwards (d. 1713) of Brunswick County and the brother of Mrs. Rebecca Edwards Jones, the beautiful "Indian Queen" and second wife of General Allen Jones.

Despite the fact that Edwards was born into old English landholding families of considerable distinction, his early life and legal training is uncertain although various circumstances point to his having spent some time in England. His first wife was Martha Williamson, but nothing is known of her except that she died early. Edwards himself first appeared in the public records of the Province of North Carolina (probably in midsummer of 1765 although the entry is undated) when he came before the governor's council to take an oath of allegiance to King George III as well as an oath of secrecy—necessary because he was succeeding Mrs. Tryon's English cousin, Fountain Elwin, as private secretary to Governor Tryon.

According to items preserved in the Colonial and State Records of North Carolina, Edwards's new position was a grueling one. Not only did he copy scores of requisitions, letters, proclamations, writs of election, and militia commissions, but he also served as bookkeeper, messenger, and diplomatic attaché as well as making a steady succession of arduous journeys on horseback to the backcountry. On Tuesday, 12 Aug. 1766, he appeared before the Inferior Court of Pleas and Quarter Sessions in Hillsborough and qualified as an attorney, possibly replacing the deceased Crown prosecutor, Daniel Weldon. This was the beginning of Edwards's five-year connection with Hillsborough and the backcountry, a connection that was part and parcel of his secretaryship. In May 1767, then listed as a captain in the provincial militia and as aide-de-camp to the governor, he accompanied Tryon on the extravagant Cherokee boundary expedition to western North Carolina to run the "Hunting Line." From 17 to 21 Sept. 1767, he accompanied Tryon, Edmund Fanning, and Henry Eustice McCulloh on a visit to Bethabara. 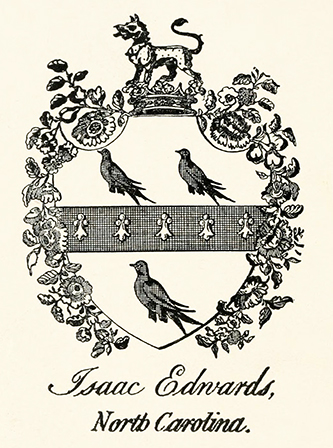 In late April 1768, after a meeting of the council, Tryon hurriedly dispatched Edwards on a swift journey to Hillsborough to bring to the backcountry settlers a special proclamation warning against "unlawful assemblages." Edwards addressed and dispersed an angry, potentially dangerous crowd of backwoodsmen, but Tryon more or less repudiated his secretary's speech, saying that Edwards had exceeded the authority delegated to him. On 6 July the governor and his entourage arrived in the backcountry to recruit militiamen in Rowan County for what is sometimes called the "First Campaign" against the Regulators. Edwards, however, apparently remained in Hillsborough and on 29 August purchased two town lots (Numbers 96 and 77) on West Tryon Street for 40 shillings, perhaps to encourage the town's first expansion program. He promptly built the sixteen-by-twenty-foot "mansion house" required to "save" a lot as well as a small law office (neither is now standing). He also bought a modest farm "on the branches of Buckwater Creek" northeast of Hillsborough and somewhat later bought two additional town lots (Numbers 97 and 78) to create a neat four-acre estate next to the Town Burial Ground. It may have been during this long three-month stay (until 2 October) among the people of the Carolina backcountry that Edwards had his sympathies actively roused in their favor.

Evidently he was back in Hillsborough again on 15 Aug. 1770, just before the September riots, for he bought his third lot on that date. According to Judge Richard Henderson, "Mr. Edwards' [House] did not escape" having its windows broken during the riots.

On 6 Feb. 1771 Edwards began to dispose of his Orange County property by selling his Buckwater Creek farmland to Samuel Cleniay (Clenny) for £230 Proc. Since both Governor Tryon and his secretary had known of Tryon's impending removal to the Province of New York well before the Battle of Alamance on 16 May 1771, the sale was undoubtedly part of Edwards's severance from his secretaryship. His Hillsborough house, office, and four lots were also sold on 21 Mar. 1772 to Francis Nash for £360 Proc. Although Edwards was listed officially as one of Tryon's four aides-de-camp for the Alamance campaign, both Edwards and William Palmer resigned on 14 May 1771, two days before the battle, to be replaced by Thomas Clark and Willie Jones. Tryon had chosen Edmund Fanning as his new private secretary and, so far as is known, did not invite Edwards to accompany him northward.

The new royal governor, Josiah Martin, had first intended to appoint Colonel John Frohock as deputy auditor of the province, but on Frohock's illness and death he selected Isaac Edwards in his stead. On 28 Nov. 1771, the Moravians had observed, "Mr. Edwards . . . is at present all powerful with the new Governor"; on 23 May 1772 he took the oath of his new office, which Martin later described as "one of the genteelest and most lucrative places in this Province."

Soon after Josiah Martin assumed office, Edwards married as his second wife Mary Cornell, daughter of the wealthy Royalist merchant Samuel Cornell, a member of the governor's council under both Tryon and Martin. In a deed of 18 July 1772, recorded in Craven County 15 Dec. 1772, Samuel Cornell for five shillings sterling and "more particularly in consideration of love and goodwill" conveyed to his son-in-law Lot 105 in New Bern (on the west side of Front or Water Street, now East Front Street) and the "messuage" (house) thereon, "formerly occupied by His Excellency William Tryon." This was apparently the home embellished by the "Chinese Fence" with its "neet, light Airy & elegant look" so carefully described by Edwards to Colonel John Williams in a letter from New Bern dated 20 July 1773. In the same letter he indicated unmistakably his altered political stance: "The Mother Country has not of late discovered any great desire to promote the wish of her children . . . & if I judge aright her children in this our dear Country have too sacred a regard for what they esteem their undoubted Birthright, tamely to surrender it to the Command of any Tribunal under Heaven."

Within months Governor Martin was complaining angrily in letters to the Earl of Dartmouth (then secretary of state for the colonies) that Samuel Cornell, hitherto a staunch Royalist, had become "influenced to . . . delinquent behaviour" by his son-in-law's ideas. Edwards vigorously promoted the First Provincial Congress of 25–27 Aug. 1774 and maneuvered so that it was held in New Bern. As one of the two representatives of the borough of New Bern, he boldly spoke out with passion and force for the patriot cause. "No more fiery exponent of American rights could be found among the seventy-one delegates than Isaac Edwards," wrote Alonzo T. Dill. "[He] alone went so far as to urge condemnation of Martin's attempt to prevent the meeting." Martin reported to Dartmouth that Edwards had been "the most zealous and forward in promoting the indecent Cabals that have been formed here" and finally recommended Edwards's removal from office.

Although Edwards had been elected a representative to the Second Provincial Congress held at New Bern on 3 Apr. 1775, he died in January some three months before it convened, "having persued to the last the same undutiful conduct," according to Martin. His grave site in New Bern is unknown, but he may have been buried in the old Christ Churchyard.

Edwards was survived by his wife, Mary Cornell, and their two daughters, all of whom removed to New York with Samuel Cornell. A deed of 1798, filed in Craven County, records that "Mary, relict of Isaac Edwards," was on 10 Nov. 1798 living in New York City as were her two daughters, Susannah Edwards (later Mrs. William Wallace) and Rebecca Edwards Ogden (wife of David A. Ogden of that city). The deed further records that Edwards had died intestate and that his daughters were then selling some of his local property to James Reed Emery.

The dramatic conversion of Edwards from Royalist to patriot, though gradual and complex, appears to have been absolute. It was made a major, compelling theme of Inglis Fletcher's historical novel, Wind in the Forest (1958).

Marshall D. Haywood, Governor William Tryon and His Administration in the Province of North Carolina, 1765–1771 (1903).