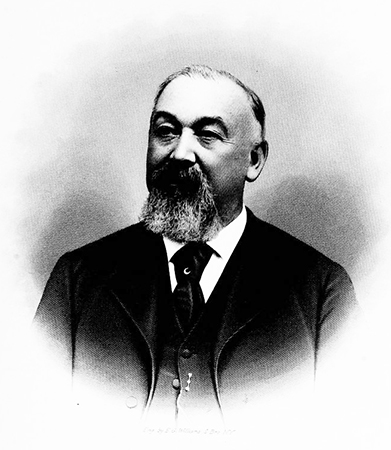 James Henry Holt, textile manufacturer, was born at Locust Grove, the home of his parents near the village of Alamance, in Alamance County. He was the son of Edwin Michael and Emily Farish Holt. After receiving his elementary education at home and in private schools, he attended the Caldwell Institute, near Hillsborough, and studied under the Reverend Dr. Alexander Wilson. In 1852, at age nineteen, Holt joined his brother, Alfred, in the operation of a general store at Graham, the seat of Alamance County, where he was also placed in charge of deposits in a private bank owned by his father.

Interested in banking, Holt became the cashier of a bank in Thomasville in 1862. Two years later he left that post to enlist as a private in Company K, Tenth Regiment of North Carolina Artillery. He was stationed at Fort Fisher from April until December 1964, when he was commissioned as a captain and sent to Fayetteville to serve as commandant of a military school. Shortly afterwards, the war ended; Holt received his parole and went back to Alamance County.

On returning home, Holt was made a member of the family firm of Erwin M. Holt's Sons. He also joined his father and his brothers in the founding of the Commercial National Bank in Charlotte and for many years served on its board of directors. From the residence he built in Graham, Holt commuted to the Alamance and Carolina cotton mills, which he helped manage. In 1879 he and his brother William built the Glencoe Mills, located two miles upstream from Carolina. When William moved to Charlotte to become a banker, James became the sole manager of this enterprise. To be nearer his office, he moved to Burlington and resided for the rest of his life in a house he built on Park Avenue. The site is now a part of the property of the Macedonia Lutheran Church. 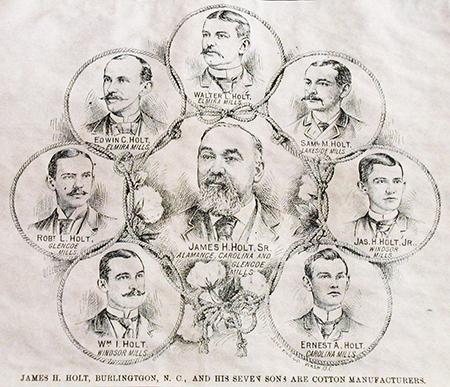 In 1890, Holt helped his sons, James, Jr. and Robert to build the Windsor Cotton Mills in Burlington. Two years later he assisted his sons Samuel and William in constructing the Lakeside Mills, also in Burlington. The aging industrialist then aided his son Walter in establishing textiles plants in Fayetteville and Wilmington. Changes in management were later made in two of the mills. James, Jr., went to Lakeside when Samuel, accompanied by his brother Ernest, moved to Texas to become a cattle rancher. Robert eventually became the manager of Carolina and almost the sole owner of Glencoe. After his death, ownership of Glencoe passed to his sister, Daisy, whose husband, Walter G. Green, Sr., managed the operation for a number of years. When Green died, changes were made in the plant and it was no longer used as a cotton factory.

Glencoe Mills continued producing cotton under Walter Green, Jr. until it closed in 1954 in the wake of increased competition from U.S. and foreign cotton manufacturing and the growth of the synthetic fabric industry.

Julian Hughes, Development of the Textile Industry in Alamance County (1965).