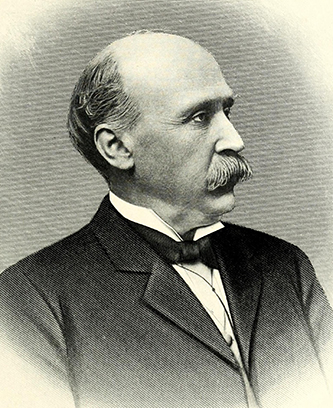 Benjamin Franklin Long, superior court judge, was born in Alamance County, near Graham, at the home place settled by his great-grandfather, Conrad Long (Lange), who had emigrated from Germany to Pennsylvania and then to North Carolina about 1760. Benjamin was the youngest son of Jacob and Jane Stuart Stockard Long. He received his early education at Graham Institute under the guidance of his older brother, the Reverend William Samuel Long, D. D., at that time head of the institute but later founder and first president of Elon College. After finishing school at Graham, Benjamin entered Trinity College in Randolph County. An excellent student, he was graduated in 1874 as valedictorian of his class. He then taught Latin and history at Graham High School for two years before entering the University of Virginia Law School, where he completed the two-year course in one year, was awarded the Orator's Medal, and was selected to deliver the commencement address as a representative of the Washington Society.

On returning home, he was offered the Democratic nomination for state senator but decided to move to Statesville to become the law partner of William McKendree Robbins, who was at that time a congressman with a good practice in Statesville. Long was an industrious worker and in 1879, in addition to his legal duties, he edited the Law Lectures of Judge Richmond Pearson from notes taken during the time he had been a student before entering the University of Virginia.

Long served as solicitor of the Iredell County court for three terms, as attorney for the city of Statesville, and as receiver for the western division of the Western North Carolina Railroad from 1880 to 1885. For two years he was mayor of Statesville, resigning to become solicitor of the Eighth Judicial District; he subsequently was reelected to that post. First nominated in 1894 as the Democratic candidate for judge in the Tenth Judicial District of the North Carolina Superior Court, he was defeated by the Republican-Populist coalition. In 1902 he again received his party's endorsement for the judgeship and was elected by a large majority; continuing to win reelection, he held this position until his death.

In 1901 Long was the author of the bill that created the graded schools of Statesville, and with two other persons he organized the Statesville Cotton Mill, the first in the town. During the same year, he served as defense counsel at the impeachment trial of Chief Justice David M. Furches and Associate Justice Robert M. Douglas. Long's speech on 25 March was considered a masterpiece. The Republican justices were acquitted by the senate, which was composed largely of Democrats; Long, also a Democrat, conducted the defense because he was convinced that acquittal was just.

Two famous cases over which he presided were the Lyerly lynching case in Salisbury and the Southern Railway rate case in Raleigh. On 6 Aug. 1906 several blacks were in the Salisbury jail awaiting trial for the murder of a white family. The local authorities had taken every precaution to ensure their safety, including alerting a military unit. Judge Long himself, with the sheriff, had spoken to some of the presumed leaders of a mob that had assembled in the area. Later that night the mob, composed of many from outside Salisbury, battered down the door of the jail and killed three of the six prisoners. The next morning, Long opened court, called the grand jury, and began his charge to the jurors as follows: "God Almighty reigns and the Law is still supreme. This court will not adjourn until this matter is investigated." Proof was difficult, every effort being made to protect the mob, but one person, George Hall, was convicted and sentenced to fifteen years; Hall was the first white man in the state to be convicted in a lynching case. Through all appeals, Long's ruling was upheld. Newspapers, both state and national, approved his decision.

The rate case, tried in Raleigh in July 1907, had grown out of legislation passed during the previous February fixing the railroad passenger rate at 21/4 cents a mile. Two days before the new rate went into effect, the railroad companies obtained an injunction from federal circuit judge Jeter Pritchard, prompting the Southern Railway to sell tickets at a higher rate than the new law permitted. In question was the authority of the state courts to prosecute violators of state law. In the opening day of court, Long directed the grand jury to decide whether Southern Railway was violating North Carolina law by using the higher rate. As a result, ticket agent Thomas F. Green was indicted and arrested. Feelings had been running high over the passage of the rate law, and Judge Pritchard announced that officers and agents of the railway company would be protected under his order. He then went to Raleigh, reportedly for the purpose of obtaining a habeas corpus for Green's release. Long ordered the sheriff to deliver up the prisoner, Green, to the court and confined him temporarily in his own hotel room. Green was not required to stay in his presence, however, except when court was in session. Pritchard, recognizing the delicacy of the situation, returned to Asheville. Long ruled that a federal court could not suspend the criminal laws of a state nor protect a citizen who was violating state law. On Green's promise to obey the North Carolina law, he was fined $5 and freed. Southern Railway, which would not accept the rate ceiling, was fined $30,000. On appeal, the North Carolina Supreme Court held that the law only applied to the person selling the tickets, although it sustained the lower court on all other questions. Eight days later, the Southern Railway suggested to the governor that it would abide by Long's ruling and compromises were worked out.

In 1912 Long was urged to be a candidate for associate justice on the North Carolina Supreme Court but declined to run. Two years later Senators Lee S. Overman and Furnifold M. Simmons recommended him to President Woodrow Wilson for appointment to the U. S. Supreme Court, but he was not selected.

Raised in a religious and close-knit family, Long maintained strong family ties all of his life. Both of his parents had a longtime interest in the orphanage at Oxford and were active in their church. He joined the First Presbyterian Church in Statesville after his marriage on 23 Dec. 1879 to Mary Alice Robbins, the daughter of his law partner Major William McKendree and Mary Montgomery Robbins. The Longs had three sons and two daughters. The oldest son died in infancy. The second son, Benjamin F., Jr., when a freshman at The University of North Carolina in 1899, was critically injured in a train accident at University Station, Chapel Hill, while waiting to meet his father; he died the same day. The other children were Lois (Mrs. Franklin Riker), a concert soprano; Marie (Mrs. Edward Mayo Land), president of the North Carolina Federation of Women's Clubs; and the youngest son, McKendree Robbins, an artist and a minister.

Long was a Mason and an Elk. He was buried in the family plot in Oakwood Cemetery, Statesville. A portrait, painted by his son McKendree, hangs in the Iredell County Hall of Justice.