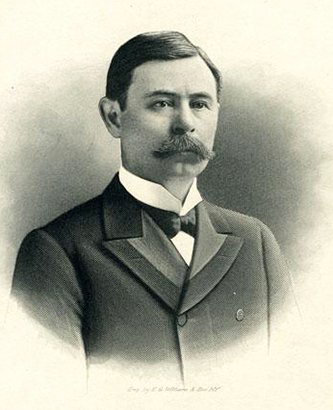 Furnifold McLendel Simmons, U.S. senator, was born at his father's plantation near Pollocksville in Jones County, the son of Furnifold Green, Jr., and Mary McLendel Jerman Simmons. He attended Wake Forest College (1868–70), was graduated from Trinity College in 1873, read law, and was admitted to the bar in 1875. Later he received honorary LL.D. degrees from Trinity (1901) and The University of North Carolina (1915).

After practicing law briefly in Jones County and in New Bern, Simmons joined a firm in Goldsboro. Several years later he returned to New Bern, which remained his home base for the remainder of his life. He was elected to the U.S. House of Representatives in 1886 but was defeated for reelection by a black Republican; in 1890 he failed to win the nomination because of the opposition of the Farmers' Alliance. In 1892 he was appointed chairman of the Democratic State Committee, and he put together a successful campaign based on county organizations that were to support him for many years. As a reward for his services, President Grover Cleveland appointed him collector of internal revenue for the Eastern District of North Carolina, a post he held until 1897.

The Democratic party chairman resigned in 1894, and within the next four years the Republicans and Populists gained control of the state legislature, won the governorship, and put a Populist and Republican in the U.S. Senate. In 1898 Simmons reluctantly accepted the party chairmanship once more and served until 1907. In the election of 1898, he sent speakers throughout the state, promised legislative favors to businessmen and religious denominations, and deluged voters with broadsides. He especially appealed to "men of Anglo-Saxon blood" to prevent "negro domination." After a campaign marked by corruption and violence, Democrats won control of the state legislature. Future control, however, was in doubt as long as black people could vote, so Simmons, in spite of campaign pledges, prepared a disfranchising amendment to the state constitution that was approved by the voters in the gubernatorial election of 1900. In 1900, too, Democratic voters nominated Simmons over Julian S. Carr in a special Democratic primary for U.S. senator, and then the Democratic state legislature elected him senator over the Populist incumbent, Marion Butler.

While in Washington, Simmons retained his interest in state politics, and a legend concerning the existence and power of a "Simmons machine" developed. This legend was largely the result of a skillful distribution of national patronage and of the influence exerted by his "friends" and his secretaries, A. D. Watts and Frank Hampton, in the selection of North Carolina governors. Simmons's friends backed Charles B. Aycock for governor in 1900, Locke Craig in 1912, Cameron Morrison in 1920, and Angus W. McLean in 1924. Simmons rarely became involved in state legislation, although he claimed considerable responsibility for the success of a campaign for state Prohibition. He collaborated in writing the Watts (1903) and Ward (1905) bills, which prohibited the liquor traffic everywhere except in large towns, and helped work out the strategy for a successful statewide Prohibition referendum in 1908.

Except in 1930 when he was defeated, Simmons's reelection to the Senate was threatened only in 1912, when three popular candidates, former governor Aycock, former governor William W. Kitchin, and Judge Walter Clark ran against him in the primary. 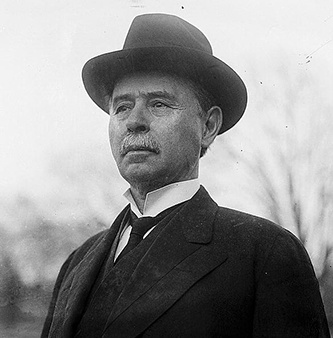 From the point of view of North Carolina, Simmons made his greatest contribution as a senator on the Committee on Commerce, of which he was a member from 1905 until he left the Senate. Year after year he wangled appropriations for the maintenance and development of the rivers and harbors of his state and with John H. Small and Lindsay Warren, congressmen from Washington, N.C., won support for building the Intracoastal Waterway from Boston to Wilmington.

Nationally his greatest influence was exerted as chairman from 1913 to 1919 of the Senate Committee on Finance. He guided through the Senate the Underwood Simmons Tariff and war revenue bills calling for unprecedented bond issues and taxes on incomes, corporations, and excess profits. In the League of Nations debate, he recognized the political impossibility of obtaining approval of the league without reservations and vainly attempted to work out an acceptable compromise between President Woodrow Wilson and the "Irreconcilables."

After the election of 1918, the Republicans organized the Senate and Simmons lost his chairmanship, but as ranking Democrat on the finance committee, he continued to be one of the most influential members through the 1920s. As the election of 1928 approached, Simmons's prestige was high, and his reelection was expected in 1930. In fact, however, he was not safe politically. He was showing his age of seventy-four years, he was not in good health, and young politicians such as O. Max Gardner and Josiah W. Bailey, defeated candidates for governor in 1920 and 1924 respectively, were not satisfied with his leadership.

Then came the nomination of Alfred E. Smith for the presidency. Simmons had supported William G. McAdoo in a bitter nominating battle against Smith in 1924, and in 1928, after McAdoo withdrew, he had attempted to win support for Cordell Hull. Although Simmons was not alienated by Smith's Catholicism as a religious faith, Catholicism, combined with Smith's opposition to Prohibition, his support of immigration, his membership in Tammany Hall, and his apparent tolerance of racial equality, symbolized for Simmons a change in the nature of leadership of the Democratic party that he could not tolerate. Thus he gave inspiration to the anti-Smith Democrats and personally refused to vote for his party's presidential candidate. The anti-Smith Democrats together with North Carolina Republicans carried the state for Herbert Hoover.

Through the years Simmons had made few political speeches, relying on his friends to carry on for him. Young potential political leaders now did not know him, while old friends were either dead or losing interest. Some of Simmons's positions had lost him support—his stand on labor during the strikes of 1929 and 1930, his opposition to private ownership of the Wilson dam at Muscle Shoals, and others. Carrying only 16 out of 100 counties, he was defeated by Josiah W. Bailey. 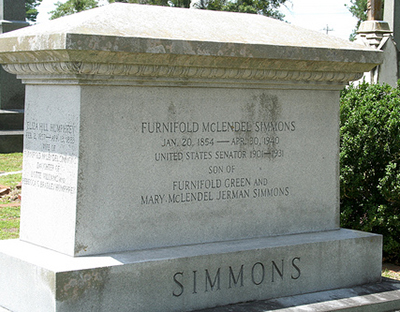 Simmons was a professional politician of the late nineteenth and early twentieth centuries. In the Senate he frequently let local interests take precedence over national interests, and he lacked a consistent worldview; he did not understand the complexities of such a limited problem as alcohol or of such a fundamental one as that of the city; he believed in white supremacy and saw no incongruity in having second-class citizens in a democracy; he accepted a political philosophy of rewards and punishments and the electioneering trickery of less-than-fastidious friends. At the same time, his legislative record was impressive: waterways, roads, forest reserves, tariffs, taxes, the postal system, and agriculture all benefited from his effectiveness as a legislator.

In 1875 Simmons married Eliza Hill Humphrey, who died in 1883 leaving him with three children, Mary Rebecca, Eliza Humphrey, and James Humphrey. In 1886 he married Belle Gibbs, and they were the parents of two daughters, Ella and Isabelle. Simmons's parents were Baptist, but in the late 1920s, apparently persuaded by his wife, he joined the Episcopal church. He died at New Bern and was buried in Cedar Grove Cemetery.

Helen Edmonds, The Negro and Fusion Politics in North Carolina (1951).