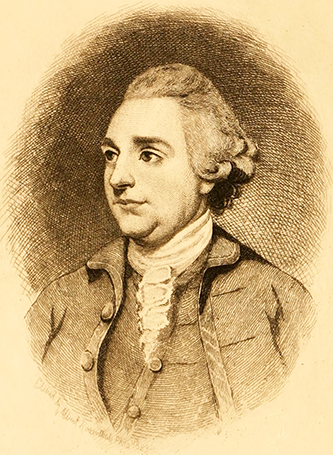 Hugh Waddell, colonial military and political official, merchant, and planter, was born in Lisburn, County Down, Ireland, the son of Hugh and Isabella Brown Waddell, both of Scots-Irish ancestry. His mother may have been the Isabella Waddell buried in Holywood Graveyard, County Down. Little is known about Waddell's early life, as his papers, lent to Dr. Hugh Williamson for his history of North Carolina, were lost. According to tradition, he accompanied his father to Boston when the elder Waddell fled Ireland after involvement in a duel. When the father and son returned to Ireland the family fortune had been dissipated, and the father died leaving his son in poverty. However, there is evidence that the senior Waddell was for a while a successful merchant in New York. Certainly young Hugh received a credible education and perhaps some military training.

Waddell's association with North Carolina began prior to 1754. Early in that year he was commissioned by Matthew Rowan, acting governor and president of the Council, as a lieutenant in one of the companies commanded by James Innes that was sent to Winchester, Va., to guard against incursions by the French and their Indian allies. These troops constructed on Wills Creek a fortification later known as Fort Cumberland. Captain Waddell was sent with a detachment to escort the captured French partisan leader, La Force, to Williamsburg in September 1754. It is not known whether Waddell remained in Williamsburg to greet Arthur Dobbs, who arrived the following month on his way to commence his duties as governor of North Carolina. Supposedly, the Dobbs, Rowan, and Waddell families were acquainted in Ireland, and this served to promote the interests of young Hugh. Soon after Dobbs qualified as governor, Waddell was appointed as one of two clerks of the Council, along with Richard Spaight, a nephew of the governor. Spaight and Waddell were corecipients of numerous grants issued by the Crown in Anson County.

British and colonial forces commanded by Edward Braddock were defeated at the Battle of the Wilderness in the summer of 1755. In response to a request by Dobbs and in fear of impending frontier hostilities, the North Carolina Assembly authorized the establishment of a company of rangers to protect the backcountry. Waddell was placed in command of the rangers. During the spring of 1756, Dobbs and Virginia governor Robert Dinwiddie entered into negotiations with the Cherokee and Catawba Indians to bind them more closely to the British cause and at the same time lessen the domination of South Carolina over the two tribes. Waddell served as the North Carolina commissioner at the Broad River meeting. During the discussions the Catawba leaders requested that a fort be built near their villages. By July 1756 construction of a fortification on the North Carolina frontier was in progress under Waddell's direction. This fort, named for Governor Dobbs, was located on a branch of Fourth Creek just north of the present city of Statesville. Later that year workmen under Waddell's supervision commenced a second fort located within the Catawba Nation in an area claimed by both Carolinas. Due to intrigue by Governor William Lyttleton of South Carolina, the Catawba chief asked that work on the fort by North Carolinians be discontinued in 1757. William L. Saunders and subsequent writers were in error in supposing that this "Catawba Fort" was located at present Old Fort. Instead, it was situated near what is now Fort Mill, S.C. 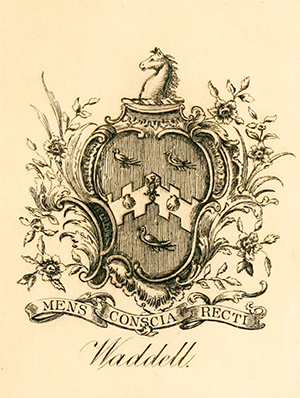 In the spring of 1758, Waddell, who had been advanced to the rank of major, was in charge of three companies of North Carolina provincials and a number of Tuscarora auxiliaries sent to Virginia to participate in the Forbes expedition. One of the North Carolina soldiers, Sergeant John Rogers, was instrumental in securing information that led to the abandonment of Fort Duquesne by the French the following November. The first warm days of 1759 witnessed a new wave of slaughter in the backcountry by disgruntled Cherokee braves. Waddell, now a colonel, moved swiftly to establish a force capable of delivering a retaliatory strike. In response to South Carolina's plea for aid, Dobbs ordered Waddell to march to its relief. This effort failed when the North Carolina troops mutinied rather than leave the province. Events on the frontier were made more critical following the atrocities committed by both Indians and whites at Fort Prince George in mid-February 1760. Ten days later, on 26 February, the Cherokee attacked Fort Dobbs. Waddell's strategy in throwing the Indians off guard was credited with saving the fort. Fort Loudon was besieged the next month, and once again South Carolina's governor asked for assistance, but to no avail. Dobbs and the Assembly were deadlocked over how to finance any new military venture. Thus, Waddell and the North Carolinians did not join with British and South Carolina troops in Archibald Montgomerie's unsuccessful attempt to subdue the Cherokee in the spring of 1760.

Ultimately British officials prevailed on North Carolina to join Virginia in establishing a second front to the north to coincide with an invasion of Cherokee lands through South Carolina by British and provincial troops commanded by Colonel James Grant. This was to occur early in 1761. Again political quarrels between Dobbs and the Assembly prevented a timely intervention by North Carolina troops. By midsummer Grant's forces had defeated the Cherokee, but it was not until late October that Waddell's troops, along with Tuscarora auxiliaries, left Fort Dobbs marching north through Piper's Gap and then west to join Virginia forces at the Great Island of the Holston. By the time the troops reached their destination, nearly one half had deserted. Their terms of enlistment over, many North Carolina soldiers went home. Fortunately the Cherokee sued for peace, and a treaty was concluded in Charles Town on 18 Dec. 1761.

In the fall of 1757 James Carter of Rowan County was removed from the Assembly on charges of misusing funds allocated for the purchase of arms. Waddell was seated as a delegate from Rowan and was subsequently commissioned a justice of the peace for both Rowan and Bladen counties. He represented the backcountry county in the Assembly from 1757 to 1760 and served as a delegate from Bladen County in 1762, 1766, 1768, and 1771. He was unsuccessfully recommended by both Governor Dobbs in 1762 and Governor William Tryon in 1771 for appointment to the Provincial Council. Tryon noted in his recommendation that Waddell had met with Lord Hillsborough when he journeyed to Ireland and England in 1768.

Although he took a prominent role in the armed opposition to the implementation of the Stamp Act in North Carolina in 1766, this did not reduce his standing within royal circles in the colony. No doubt his opposition was all the more increased by his growing mercantile interests. Waddell had trading associations with James Bailey, Robert Campbell, Faithful Graham, and Richard Spaight. However, by far his most extensive commercial connections were with his brother-in-law, John Burgwin, at Wilmington. In addition, Waddell maintained trading stations at Elizabethtown, Salisbury, Deep River, and Brown Marsh.

From mid-May to mid-June 1767, Waddell commanded Rowan and Mecklenburg militia detachments accompanying Governor Tryon to establish a boundary between North Carolina and the Cherokee. The troops marched to Dewitts Corner, a point located more than fifty miles south of the present border between the two Carolinas, in an effort to advance North Carolina's claim to this area in dispute between the two provinces. Later Waddell introduced legislation in the Assembly to pay for the cost of the expedition.

Waddell's final military venture occurred in the spring of 1771, when Tryon commissioned him a general, the highest military rank issued in North Carolina during the colonial period. Tryon's strategy called for Waddell to head west gathering militia troops from Bladen, Cumberland, Anson, Mecklenburg, and Rowan counties as he marched. While forming his army at Salisbury, he learned that his powder train advancing overland from Charles Town had been destroyed by a group of disguised Regulators who would later be known as the "black boys." This setback, along with considerable sympathy for the Regulator cause among his own troops, forced Waddell to abandon his encampment on Potts Creek and fall back to Salisbury when confronted by a large group of Regulators on 19 May. Thus, he was unable to effect a juncture of his troops with those under Tryon. Meanwhile, Tryon had met and defeated the Regulators at the Battle of Alamance on 16 May. Waddell then sent his troops into various backcountry areas to administer oaths of allegiance to the disaffected.

In 1762 Waddell married Mary Haynes, one of two daughters of Captain Roger and Margaret Marsden Haynes of Castle Haynes. Their other daughter earlier married John Burgwin. Margaret Marsden Haynes was the daughter and heiress of the controversial Reverend Richard Marsden. Both Castle Haynes and the Marsden estate, the Hermitage, were located on Prince George's Creek off the Northeast Cape Fear River just above Wilmington. Hugh and Mary Haynes Waddell were the parents of three sons: Haynes (d. 1785), Hugh (d. 1823), and John Burgwin (d. 1830). All three children were sent to England to be educated. Haynes died before reaching his majority aboard the brig Hope en route from England to Charles Town. The remaining two sons had large families, and twenty-one of their descendants were in Confederate service.

Although Hugh and Mary Waddell made their home at Bellefont located in Bladen County on the Cape Fear River, it appears that on the death of Margaret Marsden Haynes in 1770, the mansion house at Castle Haynes was being renovated for the Waddell family. When General Waddell died at Fort Johnston "after a long and painful illness," he was buried at Castle Haynes. His widow died in 1776.

A communicant of the Church of England, Waddell was described as being approximately six feet in height with blue eyes and weighing nearly two hundred pounds. An engraving of him taken from a miniature appears in Alfred Moore Waddell, A Colonial Officer and His Times, 1754–1773: A Biographical Sketch of Gen. Hugh Waddell. There has been much speculation that had he lived, Waddell might have been "the Washington of North Carolina" during the Revolution. But those who engage in such speculation should take note of the fact that many of his friends and his trusted overseer, Faithful Graham, remained loyal to the Crown, and even his executor and brother-in-law, John Burgwin, was accused of Tory leanings.

William S. Powell and others, eds., The Regulators in North Carolina (1971).