Fords, areas in streams or rivers that are shallow enough for wading, have been used by North Carolina travelers for 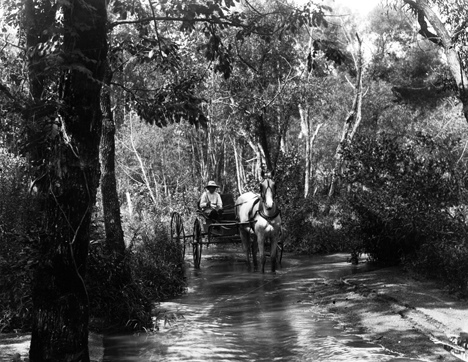 centuries to cross certain bodies of water. Suitably shallow and narrow rivers were generally more common in the piedmont and mountains; in the eastern portion of the state first settled, bridges and ferries were required to cross the wide, deep rivers that were often surrounded by swampland. The Moseley map of 1733 shows North Carolina's rudimentary road network and names a number of ferries and bridges while also implying the existence of many fords. As fords were frequently dangerous (and were impassable at high water), they contributed greatly to the hardships and slow speed of travel, which was often restricted to foot or horse.

Fords played a significant role in eighteenth-century colonial conflicts. Governor William Tryon's expedition against the Regulators in 1771 was burdened with several pieces of artillery for assaulting vital fords held by armed Regulators. On the return journey, his forces were delayed by high water at a ford for three days, no doubt due partly to the presence of the cannons. During the Revolutionary War, Lord Charles Cornwallis's pursuit of Gen. Nathanael Greene's battered army during January and February 1781 was frustrated by delays at rain-swollen fords, enabling Greene to escape across the Dan River into Virginia and strengthen his troops for the Battle of Guilford Courthouse in mid-March. Greene's men secured enough boats to allow them to cross the flooded Yadkin and Dan River fords and avoid being trapped there.

A Tar River ford figures in one dubious but popular legend explaining how North Carolinians came to be known as "Tar Heels." To prevent their supplies of tar and turpentine from being captured by the British, so the story goes, Patriots dumped them into the river, where the tar sank to the bottom and stuck to the feet of Cornwallis's troops as they attempted to ford the river. It was claimed that the unfortunate British were still trying to clean their heels when they surrendered at Yorktown.

Although the colonial Assembly passed many laws empowering county courts to oversee the maintenance of state roads, fords were rarely explicitly mentioned until the twentieth century; they seem to have been tacitly accepted as part of the road system with little explanation. But according to a 1901 legislative act, county commissioners (in taking over the administrative functions of the county courts) were placed in charge of a county's "highway, bridges, ferries, and fords." The same act required commissioners to set up guideposts at dangerous fords on highways and public roads.

Most fords in North Carolina were replaced by bridges or ferries in a steady process lasting from colonial days into the automobile age. At the end of the twentieth century, there were still a number of secondary roads with fords in Cherokee, Surry, Swain, Watauga, Wilkes, and Yadkin Counties.