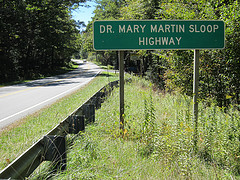 State transportation signs are evident along primary (U.S., N.C., and interstate) highways, bypasses, and bicycle routes, and can also be seen on major bridges, ferries, and railroad underpasses. They’re even posted at rest areas, welcome centers, and parks along the Blue Ridge Parkway. And many of them bear the name of a person.

The State Highway Commission, predecessor of the current North Carolina Department of Transportation, began naming state roads and bridges in 1917, after being authorized to receive federal funds and state automobile license fees to maintain those structures.

Today more than four hundred highways, bridges, ferries, and other structures have been given honorary names, and the state transportation board names another fifteen to twenty structures each year. But the state’s list doesn’t include the thousands of secondary roads and city streets that county boards of commissioners and city or town councils have the authority to name.

For the North Carolina Board of Transportation to consider a naming request, the applicant must explain what the person nominated has done to warrant the naming. The nominee’s family should support the naming request and the proposed location of the sign. City or town councils or county commissioners must adopt resolutions justifying the request. And there must be an opportunity for public input and demonstration of support for the request.

A state transportation board member must then endorse the request and present it to the board’s Road and Bridge Naming Committee. If the committee favorably recommends the request, it is held for at least one month before being considered by the full board.

Not surprisingly, the majority of people whose names appear on state transportation signs are politicians, including governors, state legislators, members of the United States Congress, and even presidents. For example, in 1963 U.S. 74 from Wilmington to Asheville was named the Andrew Jackson Highway, in memory of the nation’s seventh president, who was born in the Waxhaws area. The James K. Polk Highway in Mecklenburg County memorializes the nation’s eleventh president and a native of the county. And U.S. 15/U.S. 1 through central North Carolina is part of the Jefferson Davis National Highway, a coast-to-coast highway conceived by the United Daughters of the Confederacy in 1913 and dedicated in 1931 as a tribute to the president of the Confederate States of America during the Civil War.

Fourteen of North Carolina’s chief executives have namesake highways, bridges, or ferries. Governor James B. Hunt Jr., the state’s only four-term governor, has both a highway (U.S. 264 through Nash and Wilson counties) and a ferry named in his honor, while Governor William B. Umstead, who died after just twenty-two months in office, has a ferry and a bridge (over the Croatan Sound in Dare County) dedicated to him.

Father and son governors Richard Dobbs Spaight Sr. and Jr. each have a section of the U.S. 70 Bypass in Craven County named for them. The state’s second-longest bridge, the 3.5-mile span over the Albemarle Sound, honors Governor J. C. B. Ehringhaus, who led the state during the Great Depression. And the Cameron Morrison Bridge over the Catawba River on I-85 at the Gaston/ Mecklenburg county line pays tribute to the state’s “good roads governor.”

Eng and Chang Bunker, born connected at the chest in 1811 in a fishing village in Siam, came to the United States in 1829 and toured with P. T. Barnum’s circus. They eventually settled in Wilkesboro, where they opened a general store, married sisters, and fathered a total of twenty-two children. They later moved to Surry County, where the bridge over Stewart Creek on Highway 601 is named for them.

In 1994 several miles of U.S. 401 from the South Carolina line through Scotland County and into Hoke County were named for slain civil rights leader Dr. Martin Luther King Jr. A number of municipalities across the state, including Raleigh, Durham, Winston-Salem, Greensboro, Wilmington, and Asheville, also have named streets in honor of Dr. King, who received a Nobel Peace Prize for preaching and practicing nonviolent resistance to racial segregation during the 1960s.

In Surry County a stretch of N.C. 52 is named the Andy Griffith Parkway. It honors the stage and screen actor and Mount Airy native who made his hometown the model for the television town of Mayberry in the long-running Andy Griffith Show.

The Paul Green Memorial Highway on U.S. 421 between Lillington and Dunn memorializes the Harnett County native and Pulitzer Prize–winning playwright who wrote The Lost Colony, the nation’s longest-running outdoor drama.

Down in New Hanover County, part of I-40 is the Michael Jordan Freeway, named for the former University of North Carolina basketball standout, Olympian, and Chicago Bulls superstar, who grew up in Wilmington.

Another outstanding UNC athlete was Charlie “Choo Choo” Justice, the gridiron great for whom a segment of N.C. 150 near Cherryville in Gaston County was named. A two-time runner-up for the Heisman Trophy, Justice also played four years for the Washington Redskins.

As the home of Winston Cup racing, North Carolina unsurprisingly has three highways named for race drivers. Richard Petty, known as “the King” of southern speedways, was the first to be honored. In December 1991 the DOT dedicated an eight-mile stretch of U.S. 220 near his northern Randolph County hometown of Level Cross as the Richard Petty Freeway.

In Wilkes County a portion of U.S. 421 near Wilkesboro is named for Robert Glenn “Junior” Johnson, one of the early legends of NASCAR. And in October 2002 Governor Mike Easley signed legislation renumbering N.C. 136 in Iredell and Cabarrus counties as N.C. 3 to honor NASCAR driver and Kannapolis native Dale Earnhardt, whose race car was No. 3. The winner of seven NASCAR Winston Cup titles, Earnhardt died in a crash on the last lap of the Daytona 500 race in 2001.

Among the business and industry leaders whose names can be seen on state transportation signs are John Motley Morehead III and John Belk. A native of Spray (now Eden), Morehead was an industrialist, diplomat, and philanthropist for whom a section of I-40 in Orange County is named. Belk was the head of Belk Department Stores, founded by his father, and a four-term mayor of Charlotte. The southern portion of I-277 in Charlotte is named the John Belk Freeway.

Between Statesville and Salisbury, a stretch of U.S. 70 honors former state agricultural commissioner James A. “Jim” Graham, who held that post for thirty-six years, longer than any other agriculture chief in the nation.

And on I-40 in Orange County, the section between I-40 and U.S. 15-501 pays tribute to Harriet Morehead Berry, known as the state’s “mother of good roads.” Berry helped establish the North Carolina Good Roads Association and intensively lobbied lawmakers to pass the Highway Act of 1921, which created the modern state highway system.

Musicians who have state facilities named for them include singer-songwriter James Taylor and legendary folk musician Doc Watson. Taylor, known for such songs as “Carolina in My Mind” and “Sweet Baby James,” grew up in Chapel Hill, where the bridge over Morgan Creek is dedicated to him. Watson is a four-time Grammy Award winner from Watauga County. A portion of U.S. 421 from Boone to Deep Gap pays tribute to him and his late guitar-playing son Merle, for whom MerleFest, the annual music festival in Wilkesboro, is named.

While thousands of veterans have been memorialized collectively with highway and bridge names across the state, at least three North Carolina military men have been honored individually. In Edgecombe County a stretch of N.C. 122 is named the General Henry Hugh Shelton Highway in honor of the former chairman of the Joint Chiefs of Staff during the Clinton administration. Preddy Boulevard, part of I-85 in Greensboro, pays tribute to George E. Preddy Jr. and his brother, Bill, both of whom were fighter pilots killed during World War II. And just recently named is the Colonel Robert K. Morgan Bridge on N.C. 280 in Buncombe County. A native of Asheville, Morgan piloted the B-17 Memphis Belle, which flew twenty-five safe missions over Nazi Europe during World War II. The war hero died in May 2004.

RoAnn Bishop works as an associate curator in the Curation Section of the North Carolina Museum of History.

Can you please provide a list of roads, bridges, highways etc. named after Walter B Jones. Thank you.

information please on having

information please on having a bridge in Lincoln County named after Joshua Lee Warren
A firefighter killed in the line of Duty on June 16 2016. thank you.

NCpedia does not have any information on Joshua Lee Warren and I am not able to locate anything on the web about an effort to name a bridge after him.

I hope this helps. Please let me know if you have additional questions.