North Carolina truck manufacturing began in Wilson and Henderson in the 1910s. In about 1914 Hackney Brothers Wagon Company, a Wilson firm founded in  1854 by Willis Napolean Hackney that made buggies (horse-drawn vehicles) and wagons, turned to the manufacture of automobile bodies. The bodies could be fitted to the chassis of trucks and buses. In the

1920s-a period when tiny rural schools were being consolidated into larger school districts-Hackney Brothers became one of the nation's leading manufacturers of school bus bodies. Later the company switched to building refrigerated truck bodies made to customer specifications. The firm was sold in 1996 to Transportation Technologies, which manufactures delivery and emergency vehicle truck bodies, trailers, and fire equipment.

In 1907 Richard J. Corbitt, a successful buggy maker in Henderson, entered the automotive manufacturing business by producing a chain-driven vehicle that he called the "motor buggy." Although fewer than 100 cars were ever produced at the Corbitt Motor Company's Henderson plant, Corbitt as early as 1913 began to manufacture trucks, an enterprise that marked the firm's major focus in succeeding years. Custom-made trucks were manufactured for the U.S. Army in World War I, and their use spread to 23 foreign countries. During World War II, more than 4,000 standard trucks were manufactured at the Corbitt plant for the war effort. The company also designed and manufactured specialty vehicles for military use both before and after the war. Corbitt's T-33 military truck was at the time of its production the second-largest truck in the world and the most versatile in range of power and speed. The truck weighed 25 tons and was powered by a radial air-cooled aircraft engine. Because of material shortages, postwar production levels were held to a maximum of 150 diesel truck tractors per month. The company, the largest truck manufacturer in the South at the time, was sold in 1952 and later disbanded.

While the importance of Wilson and Henderson as truck manufacturing centers declined, other cities became hubs for the building of trucks, truck bodies, truck parts, or accessories. Freightliner Corporation, a subsidiary of DaimlerChrysler and the nation's largest truck builder, had several plants in North Carolina in the early 2000s. Its large truck assembling plant at Mount Holly was Gaston County's largest employer (with about 3,000 workers). Other Freightliner plants were in Cleveland, Gastonia, and High Point, where the company produces Thomas Built Buses for public school systems and other uses. 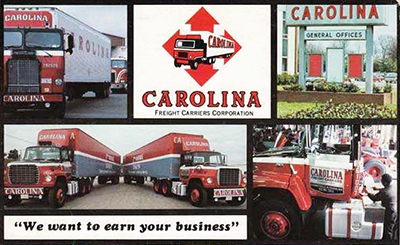 North Carolina's truck transportation industry has grown from a small operation in the 1920s to a vast system transporting a substantial portion of the state's freight and other materials-often at the expense of the railroads and air freight carriers. The trucking industry in the early twenty-first century represented about 80 percent of the state's commercial freight transportation market. Private carriers, comprising by far the largest component of the industry, were owned or leased and operated by industrial concerns, farmers, and others. So-called exempt carriers (those exempt from certain government regulations) transported only special kinds of goods or used their trucks only for specific purposes, such as hauling certain agricultural products or carrying newspapers.

The trucking industry is particularly sensitive to economic climates and changes in government regulations, particularly at the federal level. For example, three major companies-Hennis, McLean, and Pilot-moved their headquarters to Winston-Salem before 1950 only to declare bankruptcy by 1989. Other problems have plagued the industry. Low pay, particularly for drivers, has at times left thousands of driver slots unfilled. Many truckers have retired because of long absences from their families or monotony on long hauls. Others have left because of dissatisfaction with regulations at all levels of government, such as restrictions prohibiting trucks in certain lanes of interstate highways and in certain streets in localities, as well as maximum weight, width, and height limits. To cope with higher fuel costs, carriers have often absorbed these costs through surcharges or increases in basic rates.

Charlotte in 2006 was home to the most trucking companies in the state, continuing the city's reputation as a large manufacturing and distribution center. Asheville, Fayetteville, Wilmington, Durham, Greensboro, Hickory, High Point, Raleigh, and Winston-Salem/Kernersville were also large centers of trucking operations. Interstate highways have made the entire state accessible to major markets across the country, particularly in the Northeast and Southeast.