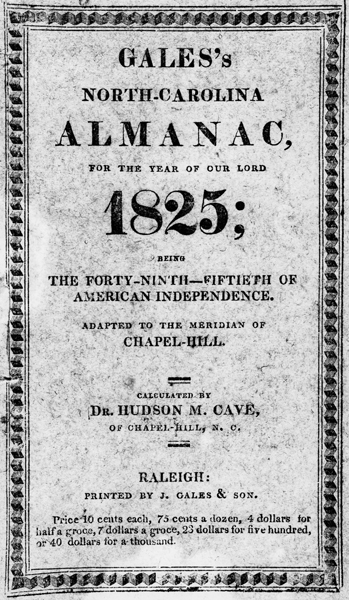 In early North Carolina an almanac and a Bible were often the only publications owned by a family. North Carolina residents relied on almanacs for information on such things as planting seasons, phases of the moon, religious and civil anniversaries, and other subjects. Almanacs also provided an important source of entertainment, as they included essays, humor, and reprinted "news" from other parts of the country and world. The margins or blank pages in the almanac might be used to record important information such as the date of a destructive storm or flood, the breeding of livestock, or even family births and deaths. Extant copies of family almanacs in libraries, museums, and archives offer a valuable source of information on North Carolina, particularly before the twentieth century.

In the Albemarle region of North Carolina, the Taylor family had almanacs from England beginning in 1663. In August 1768 the Virginia Gazette in Williamsburg advertised copies of the North-Carolina Almanack for the Year of Our Lord 1769 for sale by William Scarborough in Edenton. In 1800 John M. Slump of Lincolnton published an almanac in German, while in 1802 Joseph Gales published an English-language one in Raleigh. Other early almanacs that have survived were published by William Boylan in Raleigh (1805), Francis Coupee in Salisbury (1808), and Thomas Henderson in Raleigh (1812). Most North Carolina almanacs obtained their information from the almanacs of other states, but Philip Brooks, who identified himself as an astronomer of Richmond County, compiled one himself for 1815. Boylan and Colin McIver of Fayetteville (1823) also prepared their own information. In Raleigh in 1828 the American Tract Society published a Christian Almanac for North Carolina. Several almanacs were published regularly for many years; for example, the Blum's Farmers' and Planters' Almanac was published in Salem from 1829 to 1947, when it was absorbed by Turner's North Carolina Almanac.