How Does a Hurricane Form?

Hurricanes are the most awesome, violent storms on Earth. They form near the equator over warm ocean waters. Actually, the term "hurricane" is used only for the large storms that form over the Atlantic Ocean or eastern Pacific Ocean.

The generic, scientific term for these storms, wherever they occur, is tropical cyclone. Other names they are given, depending on where in the world they are born, are typhoons, cyclones, severe tropical cyclones, or severe cyclonic storms. Whatever they are called, the same forces and conditions are at work in forming these giant storms, which all can cause damage or devastation when they hit land where people live.

Tropical cyclones are like engines that require warm, moist air as fuel. So the first ingredient needed for a tropical cyclone is warm ocean water. That is why tropical cyclones form only in tropical regions where the ocean is at least 80° F for at least the top 50 meters (about 165 feet) below the surface.

The second ingredient for a tropical cyclone is wind. In the case of hurricanes that form in the Atlantic Ocean, the wind blowing westward across the Atlantic from Africa provides the necessary ingredient. As the wind passes over the ocean's surface, water evaporates (turns into water vapor) and rises. As it rises, the water vapor cools, and condenses back into large water droplets, forming large cumulonimbus clouds. These clouds are just the beginning.

How a tropical cyclone develops

When the water vapor from the warm ocean condenses to form clouds, it releases its heat to the air. The warmed air rises and is pulled into the column of clouds. Evaporation and condensation continue, building the cloud columns higher and larger. A pattern develops, with the wind circulating around a center (like water going down a drain). As the moving column of air encounters more clouds, it becomes a cluster of thunderstorm clouds, called a tropical disturbance.

As the thunderstorm grows higher and larger, the air at the top of the cloud column is cooling and becoming unstable. As the heat energy is released from the cooling water vapor, the air at the top of the clouds becomes warmer, making the air pressure higher and causing winds to move outward away from the high pressure area. This movement and warming causes pressures at the surface to drop. Then air at the surface moves toward the lower pressure area, rises, and creates more thunderstorms. Winds in the storm cloud column spin faster and faster, whipping around in a circular motion. When the winds reach between 25 and 38 mph, the storm is called a tropical depression.

When the wind speeds reach 39 mph, the tropical depression becomes a tropical storm. This is also when the storm gets a name. The winds blow faster and begin twisting and turning around the eye, or calm center, of the storm. Wind direction is counterclockwise (west to east) in the northern hemisphere and clockwise (east to west) in the southern hemisphere. This phenomenon is known as the Coriolis effect.

When the wind speeds reach 74 mph, the storm is officially a tropical cyclone. The storm is at least 50,000 feet high and around 125 miles across. The eye is around 5 to 30 miles wide. The trade winds (which blow from east to west) push the tropical cyclone toward the west...that is, toward the Caribbean, the Gulf of Mexico, or the southeastern coast of the U.S. The winds and the low air pressure also cause a huge mound of ocean water to pile up near the eye of the tropical cyclone, which can cause monster storm surges when all this water reaches land.

Tropical cyclones usually weaken when they hit land, because they are no longer being "fed" by the energy from the warm ocean waters. However, they often move far inland, dumping many inches of rain and causing lots of wind damage before they die out completely. 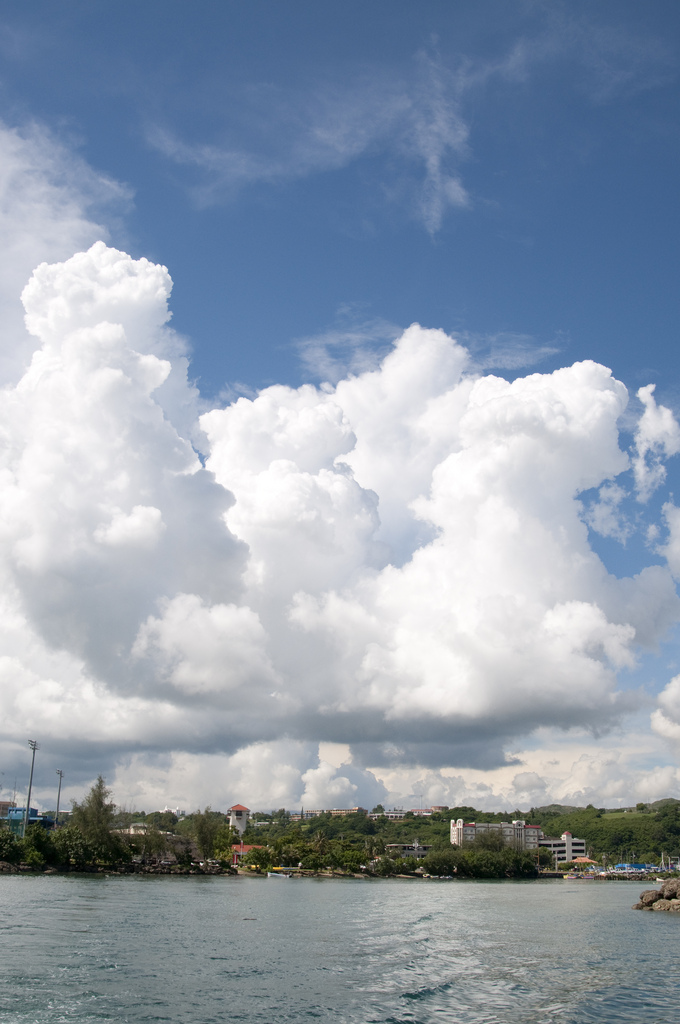 Cumulonimbus clouds, which reach high into the atmosphere, are a sign of thunderstorms and other severe weather. 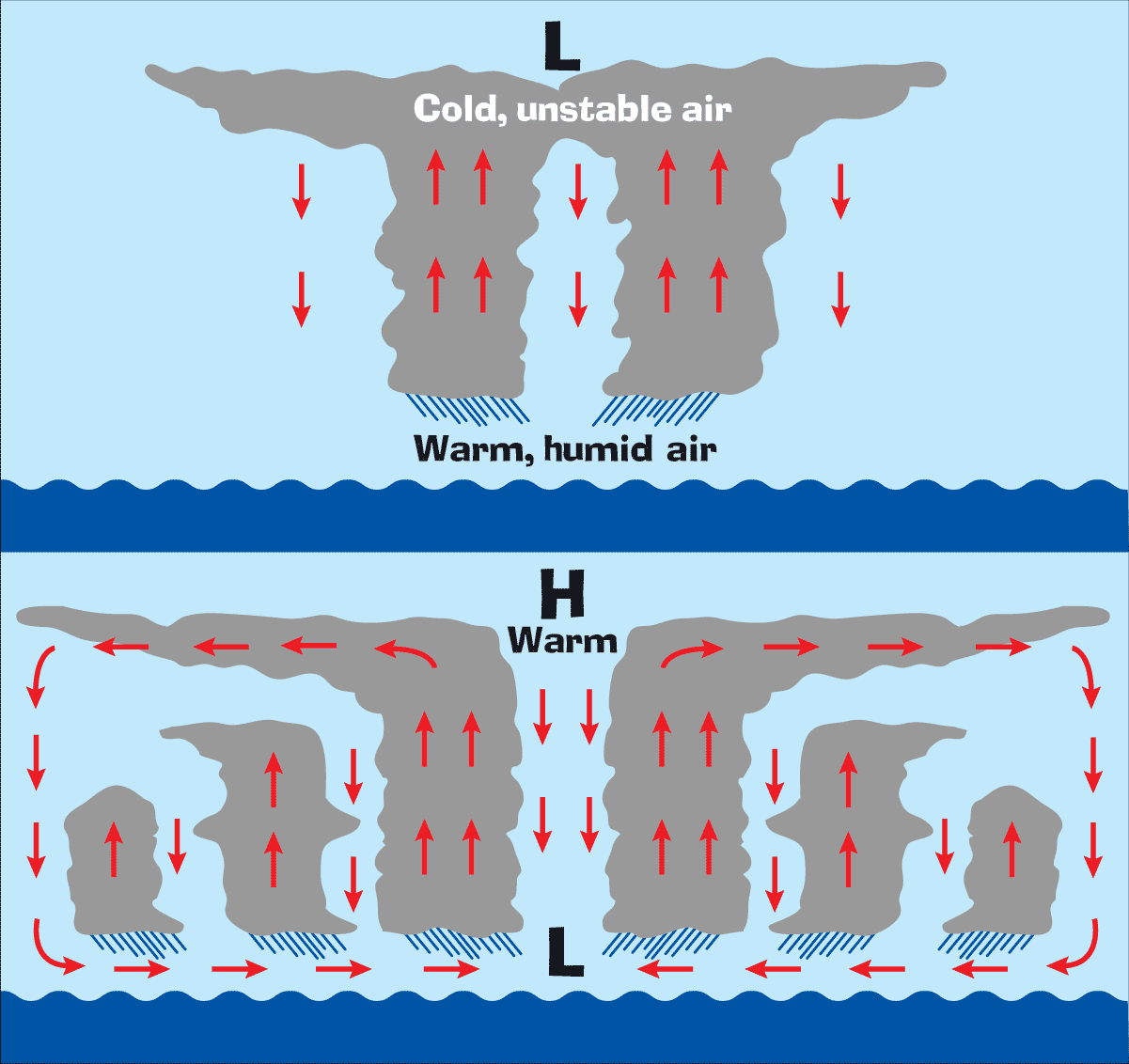 Warm, humid air rises from the surface of the ocean, then cools at high altitudes an falls back to the surface. In the center of the storm, the rising column of air leaves a low pressure area (L) that is the eye of the storm.

Tropical cyclones are called hurricanes, cyclones, or typhoons depending on where in the world they form.