M. W. [Major Wiley] Parris of Jackson County, North Carolina, enlisted in the Confederate army in 1861 at age 37. He served as a private in the North Carolina 25th Infantry Regiment, Company B. Below is a transcription of a letter he wrote to his wife, Jane Parris, on July 3, 1862. In this letter he discusses the battle at Malvern Hill, Virginia, which took place on July 1, 1862 and was part of the Seven Days' Battles. He details the names of soldiers from Jackson County that he knows were killed or wounded in battle.

Less than two weeks after Parris wrote this letter, he was discharged "by reason of being over age."

July the 3 1862 peters burg, va dear wife I one time mor take my pen in hand to let you now that I am well at this time hoping thes lines may find you well and doing well the last leter I received was dated June the 7 it give mee great Sattis faction to hear from you that you was well though I am sorry to tel that Som of our brave boys has got kild and Severl wounded in the great battle at richmond which Commenct last wensday and is Still fiting yet we have not got a correct information of all the file neither Can I tel all ded and wonded but I will tel what I have larnd a bout it giled long and John B. queen was Seen fall in the first of the fite that is all that we now of though thar was a great many missing [either?] kild of or lost now I will give the names of what was wonded Joseph moody got to fingers shot off William Cogdal wonded in the neck leander hall in the lage harris hooper in the thy or lage Samuel Parker Slitly wonded in the finger though hot his Sholder out of place and from what he Ses a bout the redgment it is but all up parker left them yesterday morning and ses that the redgment looks a bout as big as as four or five Companys our Cournel got five or six holes Shot threw his Cote and one Cut his face major frances badly wonded in the Sholder w william beard badly wonded threw the hips.

Capt Coalman his head shot off with a ball that is all I have heard of the 16 redgment our men has whipt them evry fite and has drove them Severl miles and has taken a Site of prisners with som six Jennerls and has kild Scors of them I under Stand that all of our men is bured but the is laying in piles and not bered a tall I think that we will the victry but dearly bought Severl of our men got ther gun Shot in too in thier hands the the boys has lost ther blankets in the fite tha have bin gon a about eight days frm Camp I Cant tel when tha will Com back and one of our men did in the hospitel da befor yesterday david wilson and severl is in the hospitel yet A W parris is with the rest in the fite I hant heard any thing a bout him parker did not now hoo all was mising this is all I Can find out a bout the fite I was left to gard Camp James is not well he has bin punity Severl weaks I hant any thing Elce to write at this time mor then I want to See you verry bad but I Cant tel when I will be blest with that blesing it wont be long tel my time will be out a gin but I Cant tel whether I will gt git to Com or not I hant heard any thing sed a bout that times is two hot her now I am a frade for mee to git off I will rite a gin in a few days so nothing mor may the lord bles you and thake Care of you is my prays and has bin ever sence I left you. 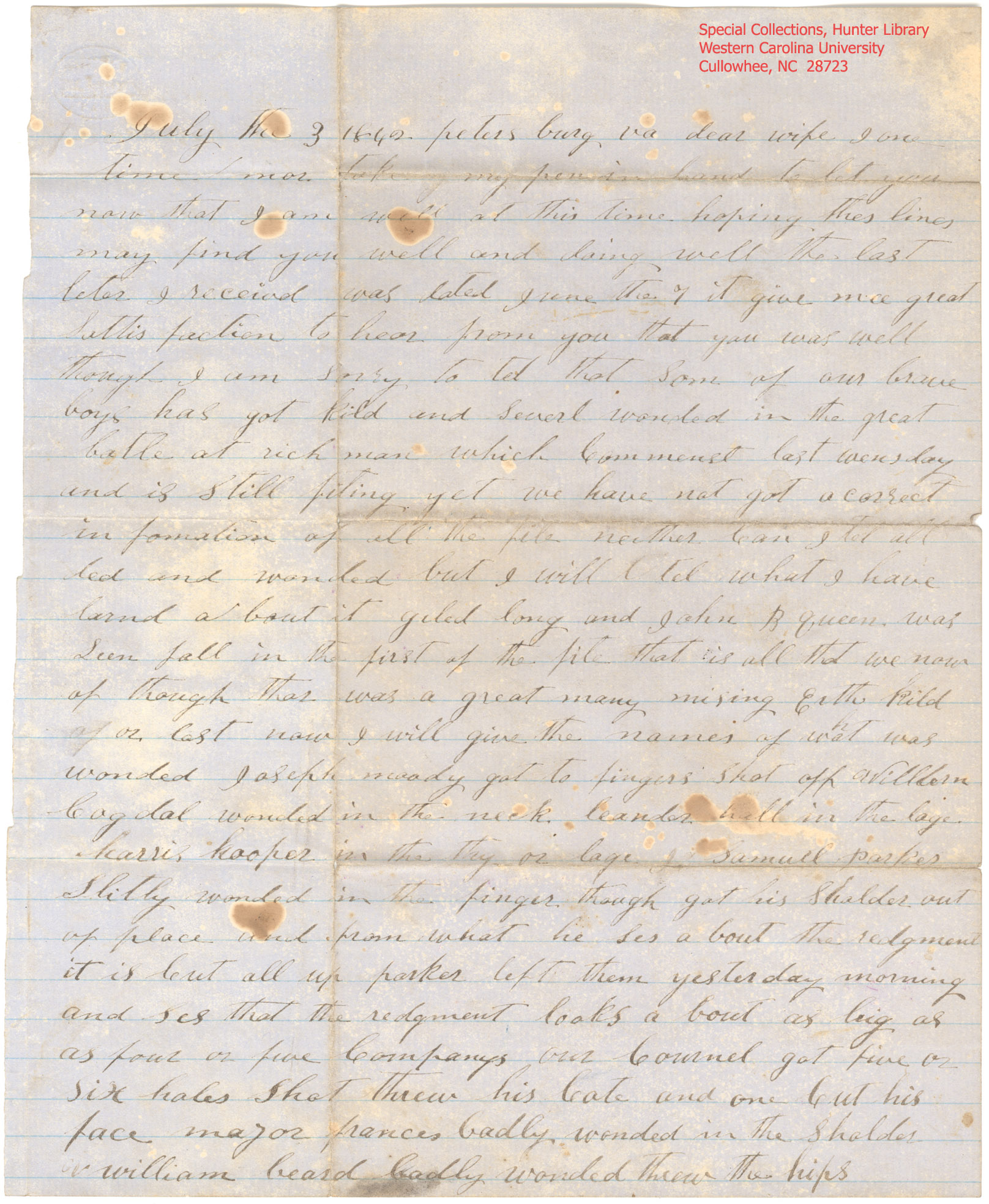