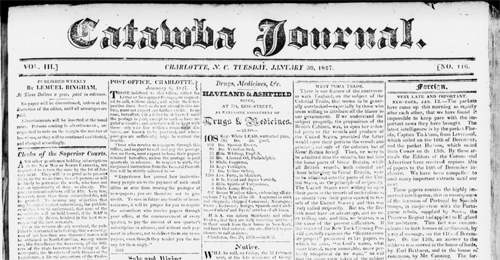 Lemuel Bingham, newspaper editor, was a native of Pittsfield, Mass. A printer by trade, he was brought to Salisbury in 1820 by Charles F. Fisher to found the Western Carolinian, first successful newspaper west of Hillsborough. It was not the very first paper for Salisbury—there is evidence of another one published there about 1814—but it was the first to draw more than a passing notice. Fisher, a backer of John C. Calhoun in politics, established the Western Carolinian as an instrument to forestall the election of William H. Crawford as president of the United States by supporting Calhoun for vice-president and either John Quincy Adams or Andrew Jackson for president. Publication of the Western Carolinian began 10 June 1820. Bingham remained with it until some time in eary 1823, when Fisher decided to back Jackson for president rather than Adams. Then Bingham turned the publication of the paper over to Philo White, a New York printer, who had joined him some six months after it had been founded.

White made the Western Carolinian an organ for Jackson; Bingham went to Fayetteville, where the Fayetteville Observer had just changed ownership. From there he worked for Adams's candidacy until the end of the 1824 campaign. Throughout his career as a newspaperman, Bingham was consistently pro-Adams and a supporter of his wing of the National Republican party, advocating manufacturing and a protective tariff and opposing nullification.

Soon after the 1824 campaign ended, Bingham went to the village of Charlotte, county seat of Mecklenburg County, and established the first newspaper there, the Catawba Journal, which he published some three or four years. In May 1828 he moved it to Salisbury and continued it as the Yadkin and Catawba Journal until early 1834, when it was discontinued for lack of patronage: another Whig newspaper, the Carolina Watchman, had been established there by Hamilton Jones and had become the effective opposition to the Western Carolinian and its pro-Calhoun policies. There was not then room for three newspapers in Salisbury.

Early in his stay in North Carolina, Bingham married Jane Miller of Rowan County, daughter of George Miller and granddaughter of Matthew Brandon. They had a family of twelve children. With the establishment of Davie County and Mocksville in the 1830s, they moved to Mocksville, where Bingham engaged in merchandising and established a tavern on Main Street catering to the students of the academy there. He was chosen clerk and master of equity of Davie County and held that position for many years.

In 1869, his wife dead, his property lost in a war to which he was violently opposed, and his eyesight failing from cataracts, he moved to Statesville and made his home with his daughter, who was the wife of Judge David M. Furches, prominent Republican leader and candidate for governor in 1892. There he died and was buried in the Furches plot in Oakwood Cemetery.

Homer M. Keever, MS on the Western Carolinian (possession of the author).

The Catawba Journal in DigitalNC: http://www.digitalnc.org/newspapers/catawba-journal-charlotte-nc/

Catawba Journal was founded by Bingham in 1824. Image courtesy of DigitalNC. Available from http://www.digitalnc.org/newspapers/catawba-journal-charlotte-nc/ (accessed May 16, 2013).