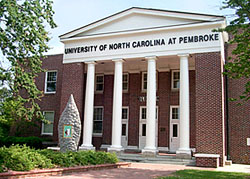 In 1971 the State of North Carolina proposed tearing down the Old Main building at Pembroke State University (now the University of North Carolina at Pembroke). Old Main, built in the 1920s, is the oldest surviving building at the school, which began as a place to educate American Indian students and opened through the efforts of Waccamaw- Siouan educator W. L. Moore in 1887 as the Croatan Normal School. The building for many years served as a gathering place for plays, meetings, and funerals for the Lumbee Indian community. Lumbee educator Danford Dial protested the idea of destroying the building by picketing with a large stop sign, starting a petition, and appealing to school and state administrators. Dial wanted the building preserved because “our modern education among the Lumbee Indians started with Old Main graduates . . . these people really did lay the foundation for Indian education all over the county, in the various Indian communities, and Indian centers. And to me, I thought this had a reason for making Old Main a historical building and a historical site.” Eventually, many outside the Lumbee community came to understand the importance of Old Main as a symbol of the history of Indian education in North Carolina, and the building was restored. The academic Department of American Indian Studies, organized later, is currently housed in the building.

American Indians felt the importance of preserving Old Main as a symbol of education far beyond the Lumbee community, in communities such as the Coharie, Haliwa-Saponi, Sappony, and Waccamaw- Siouan. The school opened as a place to train Lumbee teachers, but those who graduated with normal (or teaching) degrees after 1928 also went out to teach in other Indian communities. Although these other communities had schools, in many instances beginning in the mid-1800s, the schools often had had no Indian teachers. The system of segregation in North Carolina and other places in the United States mandated that students of different racial groups attend separate schools. The Croatan Normal School trained additional Indian instructors who were hired to teach at segregated Indian schools.

The Sappony tribe in Person County, North Carolina, and Halifax County, Virginia, also founded a school in 1887, holding classes in a church building. In 1888 the school moved to a new building on land donated by tribal member Green Martin. A later school, the High Plains Indian School, located in Person County, took in students from Halifax County, Virginia, when that state refused to support a school for the Sappony. The High Plains Indian School closed when the Person County school system desegregated in 1962.

Some schools in smaller Indian communities in eastern North Carolina did grant high school diplomas, but many did not. The law required that Indian education in the segregated system be equal to that of the white community, but in reality, the local, county, and state governments often underfunded Indian education. To help Indian students gain a full high school education, the state opened the East Carolina Indian School in 1942 in the Coharie Indian community of Sampson and Harnett counties. This school was proposed as a boarding school where students from the Coharie, Sappony, and Waccamaw-Siouan tribes could earn a high school diploma. The money that the state provided to build the school did not include funds for a dormitory to house students, so families in the Coharie community boarded the students in their homes. This school graduated students from seven North Carolina counties until 1965, when the schools in Sampson County desegregated.

The U.S. Supreme Court ruled in 1954 in Brown v. Board of Education of Topeka [Kansas], that segregation was unconstitutional and must end “with all deliberate speed.” North Carolina used a school choice program called the Pearsall Plan to avoid real desegregation. This program allowed communities to start schools with state money if their local school desegregated. During the wrangling over segregation and desegregation, the Haliwa-Saponi tribe in Halifax and Warren counties pushed to establish a school in a system where there were only schools for black and white students. Under the leadership of Chief W. R. Richardson, the Haliwa-Saponi started a private school using the Pearsall Plan. The school was eventually merged into the Warren County school system, and closed following countywide desegregation in 1969.

By the early 1970s, education in North Carolina was no longer segregated by race, and the American Indian schools closed. Indians lost these community centers, as local control of schools passed to the counties. The Cherokee in the Mountains maintained their federally supported school on the Qualla Boundary reservation, while Cherokee students living in outlying communities attended local public schools. Today, many former Indian school buildings have been transformed into commu-nity centers and tribal offices, but the Haliwa-Saponi school building in Hollister is being used as a school again. The tribe in August 2000 opened a state charter school that integrates Indian culture into the basic curriculum.

Croatan Normal School is now known as the University of North Carolina at Pembroke. The school began granting four-year college degrees for Indian students in 1940. From 1940 to 1953, it was the only state-supported four-year college for Indians in the United States. In 1954 the school desegregated completely, and in 1972, as Pembroke State University, it became part of the new University of North Carolina System. The General Assembly passed a law in 2005 that designates the university as “North Carolina’s Historically American Indian University.” The first Lumbee leader of the college was English E. Jones, president 1962–1972 and chancellor 1972–1979.

Indian education in North Carolina has come a long way since the Coharie began a subscription school—where parents paid tuition to the teacher for educating their children—in their Sampson County community in 1859. There are now many more American Indian professionals, many of whom attended segregated schools, including Dorothy Stewart Crowe (Sappony), a member of the N.C. Advisory Council on Indian Education; Dr. Louise C. Maynor (Lumbee), the chairperson of the N.C. Advisory Council on Indian Education; and Dr. Ruth Dial Woods (Lumbee), a former member of the University of North Carolina Board of Governors.

American Indians in North Carolina remain concerned about education in their communities and continue to remember the hard-fought battles won so that Indian youth could receive a good education. The Old Main building still stands, a reminder of that history of education. As Lumbee activist Janie Maynor Locklear has said, “This building is very definitely a part of our heritage, our culture, our very being, and our very beginning.”

At the time of this article’s publication, Jefferson Currie II was an assistant curator at the N.C. Museum of History. He is a member of the state’s Lumbee tribe and has done much research on American Indian history.