Outdoor dramas, sometimes called symphonic dramas, are a type of theatrical production that takes its story from local history and augments it with music, dance, and spectacle. The style evolved from pageant dramas, popular in the United States in the late nineteenth and early twentieth century, which were spectacles that presented historical events in a tableaux manner. The symphonic drama differed in that it used plot and character to tell a historical story on a grand scale. Both as popular entertainment and as tourist attractions, outdoor dramas have become key to the economic vitality of many North Carolina communities, drawing thousands of visitors each summer and providing a training ground for young actors and theater technicians. These dramas are produced for the most part by nonprofit community collaborations. In the early 2000s there were 11 outdoor dramas in production in North Carolina, more than in any other state.

The outdoor drama movement had its genesis in North Carolina with the successful production of The Lost Colony, written by Pulitzer Prize-winning author and Harnett County native Paul Green. Intended as a single season celebration of the 350th anniversary of the first English settlers' arrival on the continent, Green's drama has remained in continuous production on Roanoke Island every summer since 1937, with the exception of the World War II years. Green himself coined the term "symphonic drama" to describe his new production because it involved "all the elements of the theatre working together-one for all and all for one, a true democracy." The play relates in dramatic form the experiences of John White's ill-fated 1587 colony, one of the earliest English attempts to establish a settlement in the New World. The White settlement has gone down in history as the "Lost Colony" because the colonists vanished after White's departure for supplies in August 1587.

Green was inspired by the folk drama work of Frederick Koch, who encouraged writers to use the local stories of a community for plays. Koch and the group he founded at the University of North Carolina in Chapel Hill, the Carolina Playmakers, participated in the production of The Lost Colony and other outdoor dramas. As interest in the genre grew, Green wrote other dramas, including The Highland Call for Fayetteville, The Common Glory for Williamsburg, Va., Wilderness Road for Berea, Ky., Cross and Sword for St. Augustine, Fla., and Texas for Canyon, Texas. 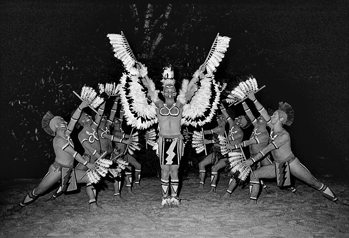 Another outdoor drama, Unto These Hills, was first performed in the summer of 1950 in the village of Cherokee on the Cherokee Indian Reservation in the North Carolina mountains. The production was sponsored by the Cherokee Historical Association, which had been established in 1948 by the Western North Carolina Associated Communities. Unto These Hills traces Cherokee history from the arrival of Hernando De Soto's expedition in 1540 to later contact with whites in the American Revolution, the War of 1812, and the forced removal to Oklahoma Territory in 1838. All but a small number of Cherokees were removed; it was this remnant, along with some who returned from Oklahoma, that became the nucleus of the Eastern Band of Cherokee Indians.

Samuel Selden, director of the Carolina Playmakers at the University of North Carolina at Chapel Hill, was involved in the early planning and production of Unto These Hills. Kermit Hunter, a playwright and graduate student at UNC, agreed to write the drama. Harry Davis, also with the Carolina Playmakers, became the first director (1950-67) and was followed by William Hardy, who served in that capacity for more than three decades. The musical score was composed by Jack F. Kilpatrick.

A 2,800-seat amphitheater, called the Mountainside Theater, was completed in 1990. Unto These Hills has been credited with having an impact on the establishment of outdoor dramas throughout the country. By the time of its fiftieth anniversary season in 1999, approximately 5.5 million people had seen the production, making it one of the most successful outdoor dramas in America.

Horn in the West is an outdoor drama that was established in Boone in 1952 and has been performed every year in July and August since that time. The idea developed from the success of a centennial pageant called Echoes of the Blue Ridge, which was performed in 1949 and repeated in 1950. Realizing the possibilities that presumably would be derived from a permanent outdoor drama, local leaders established a nonprofit organization called the Southern Appalachian Historical Association (SAHA).

After visiting a performance of Unto These Hills, leaders of the SAHA commissioned Kermit Hunter to write a play about the frontier, the American Revolution, and Daniel Boone. An architect from Charlotte and design students from North Carolina State College designed the amphitheater and grounds. Perry Greene Construction Company built the theater between April and June of 1952, barely completing the work in time for the 27 June opening. That first season attracted more than 50,000 people.

Hunter rewrote the play at least four times, but the plot remained basically the same. Aristocratic Loyalist Geoffrey Stuart has to remove to the western mountains after his son Jack is involved in the Regulator Movement. The play focuses primarily on the elder Stuart's transition from Loyalist to Patriot as he sees the insidious Col. McKenzie arm the Cherokee Indians and turn them against the settlers. The culminating event of the play is the Battle of King's Mountain, in which Jack is killed. Daniel Boone was a minor character in the original play, but the role became more and more prominent over the years. One actor, Glenn Causey, played the Boone role for 40 years.

Randolph Umberger has been another influential voice in the outdoor drama movement, authoring the North Carolina plays The Liberty Cart, in Duplin County, and Strike at the Wind!, a story of the Lumbee Indians presented in Pembroke.

In 1963 UNC-Chapel Hill established the Institute of Outdoor Drama to encourage productions and provide advice. The institute currently serves over 100 outdoor dramas around the country (including historical dramas, Shakespeare festivals, and religious dramas), as well as communities considering their own productions (of which there are generally 30 to 40 at any given time).